Earlier today, the oracular Voice Of LGT tweeted: In a battle between a pitcher who insists on walking tons of batters and a lineup that refuses to draw walks, who would prevail? In the wake of today's game, the answer now seems obvious. Short of a full-on outbreak of Rick Ankiel Disease, a pitcher simply cannot walk a batter who insists on swinging away.

At this point, Fausto's stat line induces more of a hangover than his actual pitches do. Tonight, for the fifth time this season, Fausto failed to issue more strikeouts than walks, and yet, tonight, for the sixth time this season, Fausto recorded a quality start anyway. Or at least he almost certainly would have, had rain not delayed the game for over an hour. As it is, he recorded five scoreless innings, scattering eight baserunners and benefiting from the Royals' inept hitting and strategy. When the rains hit, he had just retired the side on eight pitches, giving him a total of 70, and he looked like he could get at least into the 8th inning.

It's worth remembering, I guess, that Fausto's numbers have almost always been inscrutable. In his breakout 2003 season at Lake County, he had a 2.06 ERA but only 5.0 K/9. Looking only at the numbers, you had to figure that he was a control guy getting lucky who couldn't thrive at higher levels, but the scouts said that he had the pure stuff to get strikeouts; he just didn't. He was seemingly too good at getting groundouts to get strikeouts. In 2005, his last full minor league season, he had a 3.68 ERA but only 5.5 K/9 for Akron and Buffalo. We could never be sure what we were going to get with this guy, and when we were sure, we were wrong. It looks like he's going to keep us guessing.

Laffey and Chris Perez followed after the rain delay and looked effective-ish. Laffey allowed four baserunners but got five outs; Perez allowed three baserunners but got four outs, three of them on swinging strikeouts. Fine as far as it goes, but you'd better be getting those outs in the right moments if that's how you're going to play it. Tonight, they did. Sipp finished it off with a perfect inning to take the Tribe back over the all-important .400 line. Tonight's win also clinched the Indians' first series victory since September 2007.

On the hitting side, Branyan continued his recent tear with a single and his third home run in about 25 hours, pushing his OPS close to 900. Meanwhile, Asdrubal and Jhonny also had nice games and are each making a serious run at 700, while Grady smiles sheepishly as he looks up at 600. But sure, Bruce, keep dumping on Branyan; that seems to be working out pretty well for everyone. 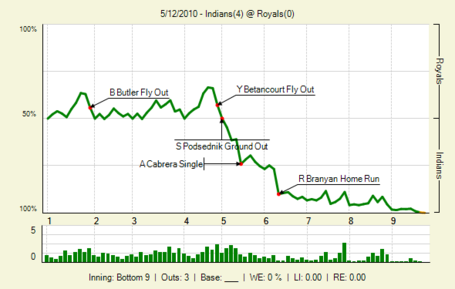