Justin Masterson looked good but left after five innings. That left a tight game in the hands of a bullpen without Kerry Wood. Before the end of the game, six out of the seven pitchers in the bullpen made appearances. If you were still viewing this game through the prism of last year's team, you would conclude that the White Sox would win going away. After all, in a matchup in bullpens, Chicago probably wins at least 7 out of 10 times.

But that's not what happened. The bullpen did give up the lead in the seventh on a Carlos Quentin two-run home run. Joe Smith gave up the blast after going into the game with a runner on. Smith grooved a fastball right down the middle of the plate, and with one swing of the bat the White Sox took the lead. Smith and three other relievers wouldn't allow a run over the next 4.2 innings. The relievers weren't dominant, allowing 7 base runners (including 5 walks), but targets were hit and pitches were executed. It isn't advisable for the Indians to lean on their bullpen to the extent they did tonight, but it was nice to see several consecutive relief appearances.

Grady Sizemore was responsible for three of the five runs, collecting three hits in six at-bats. He doubled twice, the second one driving home an important insurance run in the 11th. But perhaps the most important hit of the night came off the bat of Jhonny Peralta. After Chicago took the lead in the bottom of the seventh, Ozzie Guillen had the perfect setup to finish the game. Southpaw Matt Thornton, who had obliterated the Indians earlier in the series, was brought out to start the eighth against three straight left-handers. Thornton struck out Sizemore and Choo, and got Hafner to ground out to first, but the ball went off Paul Konerko's glove. Jhonny Peralta, next up, started the at-bat looking for an outside fastball. He didn't get what he was looking for early in the at-bat, but he kept alive long enough for Thornton to leave a fastball up over the outside half of the plate. Peralta laced the pitched into the right field gap, and Travis Hafner was able to score all the way from first.

The Indians had a very good opportunity in the ninth inning against Bobby Jenks, who seems a shell of himself. Lou Marson reached base on an error, and was sacrificed to second by Michael Brantley (though Brantley was up in the count 3-1 at the time of the bunt). But Asdrubal Cabrera and Sizemore both struck out, and the game went into extra innings.

The breakthrough came in the 11th against J.J. Putz, another reliever whose stuff was greatly diminished from his prime. Luis Valbuena laid down an excellent bunt to reach base, and after Lou Marson bunted him over to second, Brantley struck out. Asdrubal Cabrera picked up the slack, though, blooping a single into shallow right field, driving in what would be the game-winning run. 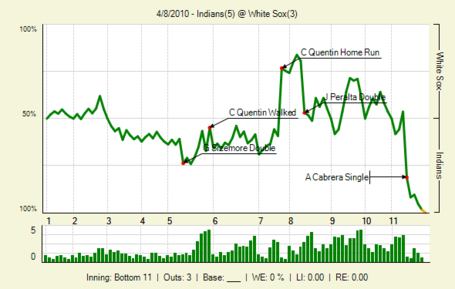