There were a lot of 2009 exorcisms tonight:

The game started as many 2009 Fausto Carmona games did, with Fausto walking two White Sox hitters in the first inning, and giving up a run without allowing a hit. In the third, he walked Carlos Quentin and then gave up a two-run homer to Paul Konerko. That's where the resemblance ended. Carmona worked his way through three scoreless innings, and despite having to deal with a bad strike zone, settled down. He ended the night having given up six walks, but only one hit (the Konerko home run). By that time the Indians had gotten to Jake Peavy (who, unlike Carmona, started out well, but fell apart in the middle innings), and Fausto was in line to get credit for a well-deserved win.

In 2009, what leads were given to the middle relievers were often frittered away. Tonight Aaron Laffey and Joe Smith combined to bridge the gap between Carmona's encouraging start and Chris Perez's save. If Aaron Laffey is going to used in the manner Manny Acta used him tonight, I could start to understand why he was moved to the bullpen. Laffey was brought into a one-run game in the seventh inning, and got four quick outs. Joe Smith, who was a non-entity on last year's club, got his two assigned right-handers out.

Despite falling behind Chicago 3-0 early, the offense worked their way back against Jake Peavy with patient at-bats. They walked 6 times and collected 10 hits, forcing Peavy from the game after five innings and also scoring an insurance run over the slimmer (but less effective) Bobby Jenks in the ninth. Matt LaPorta drove in the go-ahead run in the seventh on a ball that Alex Rios might have caught had he made a good jump. In the ninth, Shin-Soo Choo reached on an unintentional bunt, then took advantage of Jenks' indifference to runners by stealing both second and third. Andy Marte then drove home Choo on a sharp-hit grounder that Mark Teahen needed to dive for.

Andy Marte played a key role in the win, both driving in a 9th inning run and making an excellent defensive play to end the game. 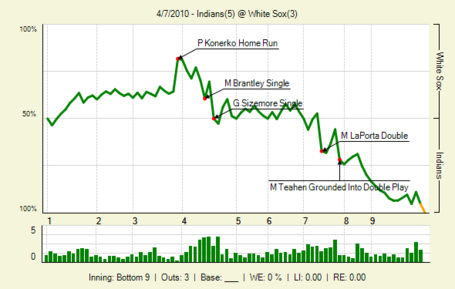