Share All sharing options for: Game One: White Sox 6, Indians 0

Because Opening Day is the first time you'll get to evaluate a baseball club in almost six months, it's very easy to read too much into that first game, be it good or bad. It's possible that the Indians were shut out by the best starter on the best starting staff in baseball. Or it's possible that the Indians' lineup is destined to be one of the worst of the game. We won't know for sure the relative strengths or weaknesses of the offense until about six weeks into the season.

But today's pitching performance reinforced the almost universal opinion that the Indians' rotation is going to be very bad this season.

Jake Westbrook threw like a pitcher coming back from Tommy John surgery. His velocity seemed to be pretty normal, but his control was not. Jake tied a franchise record by throwing four wild pitches in his four innings of work, in addition to 4 walks. Westbrook's line looks like a late model Carmona start; sure, he gave up a two-run bomb to Paul Konerko, but the walks and wild pitches were the main problems today. I'd expect to see another start or two like this before Jake is Jake again, which is no big deal in the grand scheme of things. The main goal from today's start will be reached tomorrow if Jake comes to the park with his arm feeling good.

That Jake made this Opening Day start says a lot about the quality of this rotation. He wasn't picked because he was the longest-tenured Indian; he was picked because the Indians feel he's the best pitcher on the staff. It's going to be a scary spring for this pitching staff; if they can stay relatively intact through Memorial Day, the coaching staff will have earned its pay.

Aaron Laffey, who has again been shunted to the bullpen because the Indians don't have enough good relievers to fill it with, calmed things down with a scoreless two innings of work. Laffey really belongs in the rotation, and given how things look, will be back there fairly soon. Jensen Lewis pitched a scorless inning, but Tony Sipp gave up a home run to Alex Rios. Sipp is going to be a very important piece of the bullpen, and it's important that he be able to pitch to both right-handers and left-handers.

There weren't many highlights offensively. Four Indians got hits, all of them singles, and Jhonny Peralta drew the lone Indians walk of the afternoon. 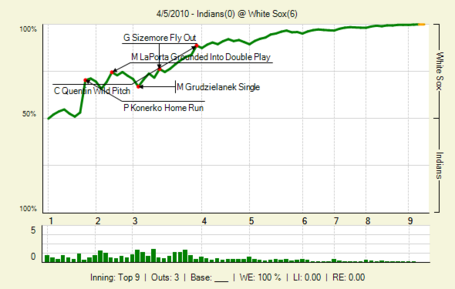