An errant throw lead to a three-run second inning, and the Indians could never claw their back into the contest. The low throw by Luis Valbuena wasn't an error, since the throw was part of a double play attempt, but the play should have made, and if it had, the Indians would have ended the top of second just down 2-0. A run scored on the play, and after Denard Span stole second, Orlando Hudson plated two more on his single.

Fausto Carmona gave up six earned runs, and though his line is somewhat misleading, the third run in the second and a run in the fifth were directly attributable to allowing Twins runners to get fantastic jumps towards second base. In the fifth, he allowed a stolen base to Hudson, allowing the Twins to stay out of a double play (Justin Morneau hit a sharp grounder to second just after the base was stolen), and with two outs, Hudson was driven home on a Michael Cuddyer single. Carmona did finish six innings, which was a plus for the short-term health of the bullpen; too many times last season, Carmona would have completely imploded in the early innings, leaving the bullpen to throw six or more innings in a game.

Kevin Slowey shut the Indians out through four innings, but he barely got through the fifth inning. Michael Redmond got a gift double with one out; a fly ball to right-center fell between Denard Span and Michael Cuddyer. Four hits later, the Indians had cut the lead in half, and Jhonny Peralta stepped to the plate as the tying run. He flew out, and that was the last real chance the Indians had of getting back into the game. During that inning, Travis Hafner lined a double down the left field, a nice piece of hitting, and hopefully the first sign of a power surge. Pronk had hit only four extra-base hits going into the game, and the Indians offense desperately needs some pop.

Rule 5 pick Hector Ambriz made his Indians debut in the eighth, and thanks to a nice catch by Grady Sizemore, got through the inning with no runs allowed. Ambriz had been very good in his "rehab assignment" with the Clippers (8.0 IP, 9 H, 15 SO, 1 BB), so the Indians might have called him up even if he had been a typical 40-man roster pitcher. 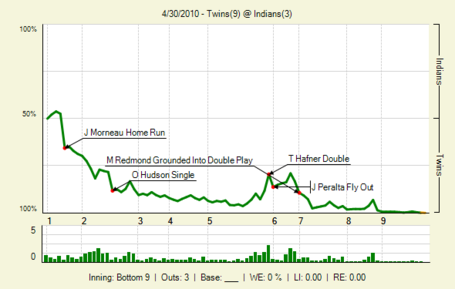