Coming into today, Justin Masterson sported a 3.00 ERA and a strikeout/walk rate of 20/7. Great, right? From a standpoint of keeping his team in the game, sure. But beneath that good ERA was a major problem; left-handed hitters were hitting .458 against Masterson. And they weren't just getting singles, either; they were slugging .625 against him. That's an unsustainable trend for a starter who, now that teams know about these splits, will be throwing at least four or five left-handers into the lineup for each of his starts.

Today, the ERA  caught up to the splits. Masterson gave up seven earned runs in four innings pitched, and most of the damage came from left-handed hitters. In fact, the only hit given up to a right-handed hitter was Masterson's last batter faced, Kevin Kouzmanoff; Many Acta let him face the LGFT hitter, even with the bases loaded and nobody out, because at least he was shutting down the right-handers. Kouzmanoff doubled into the gap, clearing the bases and ending both Masterson's day and any chance of the Indians getting back into the game. Towards the end of his outing it seemed that Masterson was losing confidence, aiming for corners and missing.The Indians do need to give him 3 or 4 more starts to see the experiment through, but I think it's a matter of time until he's a reliever again.

Replacing Masterson in the game was Aaron Laffey. While Laffey was warming up, the game was still a competitive one, but he ended up throwing two innings of mopup duty. I still maintain that Laffey is best used as a starting pitcher, but if he's going to be in the bullpen because the Indians putatively don't have enough actual relievers, then he needs to be pitching multiple innings in close games, not blowouts.

The offense was shut out for the fourth time in eighteen games. Gio Gonzalez went seven shutout innings, by far his longest and best outing of the season, allowing seven base runners (five hits, two walks). The Indians had a good opportunity to at least score a run in the fourth (when the game was still in doubt), but Matt LaPorta struck out on a pitch out of the zone, and after Luis Valbuena walked, Lou Marson flew out to end the inning. Marson right now is a hole in the lineup; he's reached base just six times in his 38 plate appearances this season. LaPorta hasn't fared a lot better; he's reached base 15 times in 57 plate appearances. 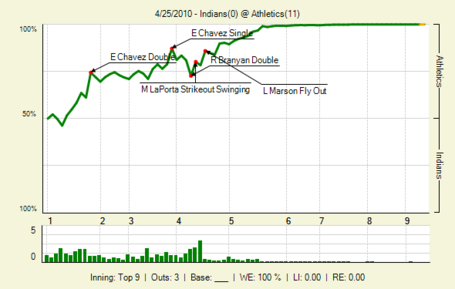