Oof. Five double plays, three errors, one pick off and zero runs scored. All of it added up (not literally, but you get the idea) to a 10-0 loss to the A's.

Jake Westbrook wasn't that bad, allowing one run through five innings, but was chased in the sixth after giving up three quick runs on three straight hits. The game went downhill from there. Aaron Laffey kept Oakland in check for two innings, but Jamey Wright imploded, allowing six runs in the eighth. He pitched to ten hitters in that inning, gave up four hits, walked two, and the defense contributed two errors. Of Wright's six runs, only one was earned.

The Indians hit Justin Duchscherer fairly well, though that didn't translate into runs. A first inning rally quickly dissipated when Shin-Soo Choo hit into a double play, and that scenario seemed to repeat itself all game long. Duchscherer induced three double plays in his six innings of work, and by that time, the game had gotten out of hand. 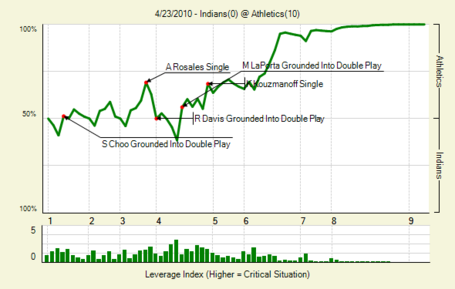