After two depressing losses, it was really nice to see the Indians get out of Minnesota with a convincing 8-1 victory. What was even nicer was the offensive showing. Or, more specifically, to see that the Indians had an offense. Sure, there's been some crucial hits in the first couple weeks of the season, but more times than not they've come from the top three hitters in the order. Today, the supporting cast picked up the slack, and took down a pitcher that gave the Indians fits last season.

Andy Marte, who was filling in at third base for Jhonny Peralta, was the offensive star. His fourth inning home run pushed the Indians lead from 1-0 to 3-0; he also later drove in the Indians' fifth run of the game with a sixth inning single. Among the other contributors were Russell Branyan (1-4, 2B), Asdrubal Cabrera (2-5), and Matt LaPorta (1-2, 2 BB).

Even with the offensive outburst, the most impressive showing came from Mitch Talbot, who continued today where he left off in his last start. Talbot allowed one unearned run in six innings, and though he was in some trouble from time to time, he gracefully worked his way out of jams. He only gave up two hits, one of them (a double) coming after an error prolonged in the fourth inning. 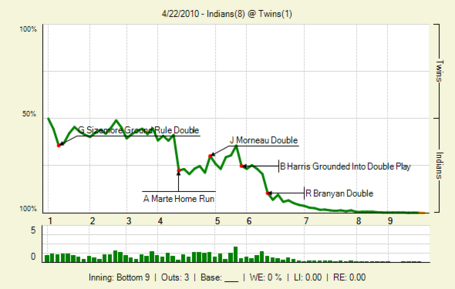