Even during this four-game winning streak, the Indians haven't been running on all cylinders. The bullpen, when it's been called upon, has been very shaky, and the bottom two-thirds of the lineup hasn't contributed much at all. But outstanding starting pitching and good defense has made up for these deficiencies, and the Indians are now at .500 just in time to start a difficult road trip.

The fortunate thing about baseball is that you only have to defeat the team facing you on that given day. White Sox starter Gavin Floyd didn't have it today, and he was chased from the game in the second inning. Mark Grudzielanek, today's inexplicable DH, got a key two-out, two-run hit in the first inning to give the Indians a 3-0 lead, and Shin-Soo Choo hit a second inning grand slam to effectively end Floyd's outing.

The Indians wouldn't score another run thanks to Chicago's deep bullpen, but Fausto Carmona and six (!) relievers would keep the Chicago offense at bay. Carmona had some tough innings towards the end of his outing, but ended his day with a quality start (6 IP, 6 H, 3 ER, 4 SO, 2 BB). Walks often hold the key to a Carmona outing, and today his control was pretty good.

After Carmona left, Manny Acta wore out a path to the pitcher's mound over the final three innings. Joe Smith made the longest appearance at 1.1 scoreless innings, but Rafael Perez and Tony Sipp were quickly pulled after allowing two base runners. Thanks to long outings by the starters in the past week, Acta had the luxury of calling upon a fresh reliever to bail the team out of the inning.  Chris Perez came in with one out in the ninth to retire Carlos Quentin and Paul Konerko to record his fourth save. 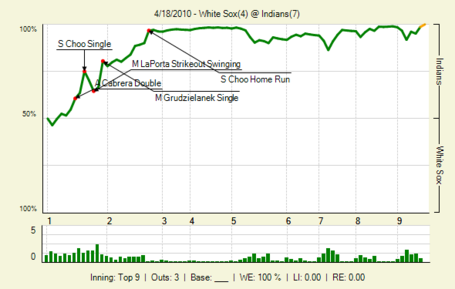