The Indians came from behind in the eighth inning for the second time in three games to win a close, low-scoring game. Very good starting pitching and just enough offense isn't exactly how you expected the Indians to win games, but despite half the everyday lineup slumping, the Indians are now within a game of .500 thanks mainly to the rotation.

Jake Westbrook went seven innings, giving up two earned runs on five hits and three walks. He gave up his second run of the game in his last inning, and until the Indians' two-run eighth was in line to take the loss. Jake's control was better today, though he still has some room for improvement on that front. The Chicago lineup hasn't been very good this season, so perhaps it's dangerous to project anything based on today's performance, but the stuff seems to be back, and that's an excellent sign.

Jake Peavy made his best start of the season today, pitching into the eighth. Ozzie Guillen had relief ace Matt Thornton warming and ready in the bullpen, but let Peavy pitch to Asdrubal Cabrera with one out in the inning. On his 109th pitch of the ballgame, Cabrera drove a fastball out to right field to tie the game. Thornton then was summoned to pitch to three consecutive left-handers, but Grady Sizemore lined a single back up the middle and Shin-Soo Choo drove a double into the left field gap to drive Grady home from first.

Chris Perez, relying more on his fastball than in previous outings, retired the White Sox (though Paul Konerko narrowly missed an extra-base hit) in order to get the save. 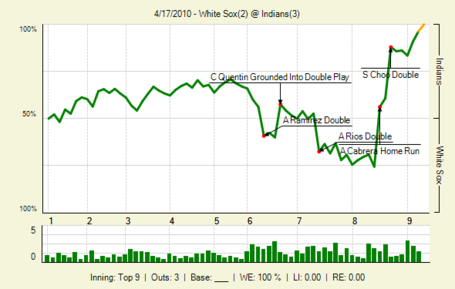