Prior to tonight's game, Mitch Talbot hadn't pitched far enough into a game to even qualify for a win as a starter. Granted, Talbot's major-league experience has been brief (14.2 innings, 2 starts before tonight), but it made tonight's complete game performance even more remarkable. Mitch breezed through nine innings, inducing 17 ground ball outs and allowing just one earned run. The earned run came on a hanger to Paul Konerko, who rifled a home run onto the home run porch through a stiff breeze. An unearned run came when Shin-Soo Choo let a routine grounder go under his glove, allowing Alexei Ramirez to score from second. That was it for the White Sox offense. Talbot made the complete game look easy; he rarely worked to get an out, and often retired the hitter within a few pitches. His fastball sat in the low 90s all night, and even in the late innings touched 94 or 95 mph, but he mixed in his other pitches very well, inducing many easy or routine outs. It was an impressive performance.

The Indians scored their six runs in two three-run innings, both catalyzed by White Sox miscues. In the fourth, Mark Buerhle walked the slumping Jhonny Peralta, and then uncorked a wild pitch, allowing Peralta to get to second. Jhonny got to third on a fly ball to right field, and scored on an Austin Kearns single. If not for the wild pitch, Peralta never gets past second base. After the Kearns single, Luis Valbuena got on top of a high high-80s fastball and drove it out of the yard. In the sixth, the Indians scored two when third baseman Mark Teahen misplayed a Lou Marson chopper, letting the ball bounce off the heel of his glove into the outfield. Asdrubal Cabrera topped things off with a double down the left field line, scoring Marson.

At the beginning of the season, it was thought that the Indians' offense would be good, but not good enough to make up for a poor starting staff. Ten games into the season, the opposite has happened; in several of their 6 losses, the starter was the one keeping the Indians in the game, but the offense didn't pull its share of the load. Now the fourth and fifth starters of that maligned staff have thrown back-to-back complete games, something that hasn't happened in 14 years. I think I need to get out of the prognostication business. 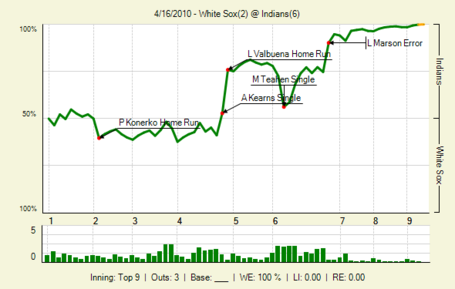