Game Nine: Why You Should've Watched

Share All sharing options for: Game Nine: Why You Should've Watched

Hey, just for kicks, how about a goddam victory?

How about a big honkin' three-run bomb?

How about a kick-ass pitching performance from one of our many talented but suspect young players?

Better yet ... how about ALL THREE!

Yes, it was a veritable salad day for our young and arguably improving Cleveland Indians, and in particular for one David Huff.

David Huff.  What can we say about David Huff?  It's been a real up-and-down for Huff right from the start.  UP:  First-round draft pick!  down:  Immediate injury, probably worthless now.  UP:  Hey, he's healthy!  And with a low ERA!  And great periphs!  And look, he jumped another level!  "Maybe he's Sowers without the suck!"  down:  "Led" the team with a 11 "victories" in his rookie season while basically pitching like an 8th starter.

But we believed in David Huff.  I did, Paul did, Adam did.  Hell, that ought to be good enough for you.  It was part of our minionaire groupthink dogma:  David Huff will be a very fine pitcher, damn it, and to all you naysayers we said SHUT UP SHUT UP SHUT UP!

And at least for one day — today — we look marginally intelligent for believing in him.  Huff opened the season last week with a fairly nondescript start in Detroit.  His ERA looked good, but the overall line was pretty meh.  Not today, though.  True, the K rate is still not very inspiring, but at least he has the tiny walk rate to match.

The big thing, though, is that big CG.  Due largely to low pitch limits after his 2007 injury, Huff had only one complete game to his credit in the minors, and none in the majors.  He cruised today, though.  He mowed down the first nine batters in order.   His only real trouble came in the fourth, when he gave up a single and a home run.

In the meantime, the Indians lineup featured all four bench players — Kearns, Grudzialenek, Marte and Redmond — and for the most part the same old results.  Eight of our hitters put together a whopping four singles and one walk.  That other guy, though — that Choo fella — he did a little damage.  And even better, he did some very well-timed damage.  After posting seven big ol' zeros against the Rangers' Matt Harrison, the top of the lineup came up to start the 8th inning.  The Rangers infield allowed both Cabrera and Sizemore to reach on errors, which set up Choo's towering shot to right-center.

So rather suddenly, the score was 3–2 Indians, heading into the 9th.  It was a save situation, but Huff had only thrown 95 pitches.  More to the point, he'd sat down 13 out of 14 batters, allowing only one walk, since running into a little trouble in the 4th.  And perhaps most to the point of all, Chris Perez has been terrible.  And so it was that Huff and his 95 pitches strode to the mound to start the 9th, with no reliever even warming up in the pen.  Nine pitches later, it was all over — in a good way.  Huff faced just 31 batters — 24 of them from the right side — and gave up just four hits and one walk.  It was, by any reasonable definition, a gem.

Later on, Choo would reflect on today's big hit and his recent struggles:

I try to hit something good, but every time something bad happens.  I just tried to hit the ball hard.

So even from the bench, Peralta was able to contribute something today:  He's teaching Choo how to speak English. 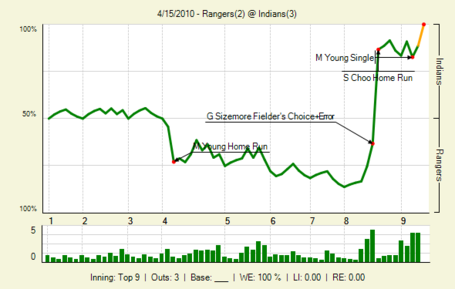