The home opener is always a special day on the baseball calendar, especially, it seems, in the northern cities. The first home game of the year in Cleveland marks one of the first outdoor events of the year, and no matter how poor the outlook of the team on the field, it's almost always a sellout. Even during the dark days of the 70s and 80s, 50,000+ fans would regularly show up at Cleveland Stadium for the home opener. Since Jacobs/Progressive Field opened, each home opener has been a sellout, even as overall attendance has fallen off. 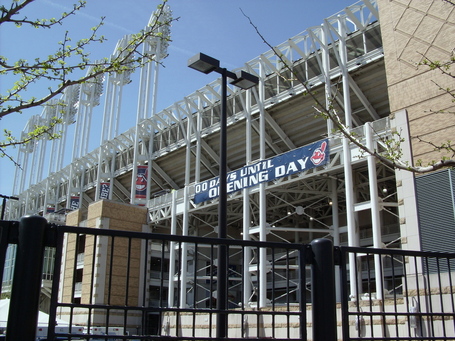 The 70th anniversary of Bob Feller's Opening Day no-hitter was honored, and Bob can amazingly still throw from the mound at 91 years old. 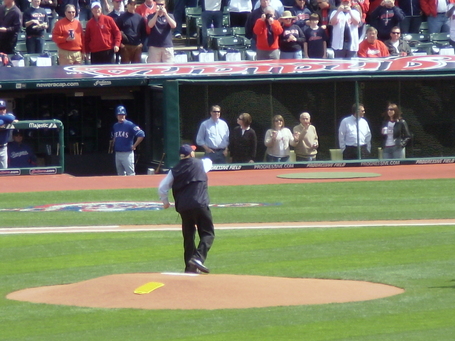 Today marked also marked the return of the old Fausto Carmona, though he pitched much better in Chicago than the line would indicate thanks to an awful strike zone. He went eight innings, throwing 112 pitches, and striking out four. He also walked four, but only allowed five hits. He was in control the entire game, locating his sinker down and in against right-handed hitters, and inducing lots of easy popup and fly ball outs. 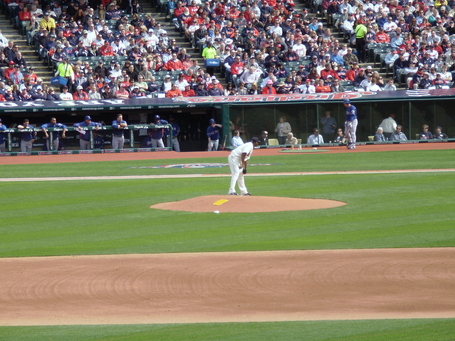 Unfortunately, the Indians offense again couldn't muster more than a minimum of runs. They struck early with a Shin-Soo Choo home run, and later tied the game with Jhonny Peralta sacrifice fly, but had other scoring opportunities. In the third inning, Choo forgot how many outs there were, and was doubled up by the Rangers. In the sixth, after the Indians tied the game, Matt LaPorta singled with Hafner on second, but Pronk was tagged out at the plate. In the ninth, a line shot off the bat of LaPorta was snagged on a great defensive play by Elvis Andrus, and Luis Valbuena hit what would normally have been a home run to right field, but the wind blowing in from right held it up. Nelson Cruz would homer off Jamey Wright in the top of the tenth, and the amazing Neftali Feliz, throwing an effortless 100 mph fastball, would mow down the Indians in the bottom of the inning to close things out.

Chris Perez almost gave the game away an inning earlier. A day after blowing a two run in Detroit, Perez loaded the bases with nobody in the top of the ninth, against the bottom third of the Rangers order to boot, and was pulled by Manny Acta. Tony Sipp and Jamey Wright got Perez off the hook, but Perez's wildness is getting to be a major concern. Chris fell behind 3-0 to Joaquin Arias, and crushed a double to the right field gap as Perez tried to get back into the at-bat. Perez then threw wildly to third when Taylor Teagarden laid down a sacrifice bunt; normally an infield is telling the pitcher where to throw, and I don't think Arias is out even if the throw is on target. Perez then walked Elvis Andrus to load the bases and end his afternoon. 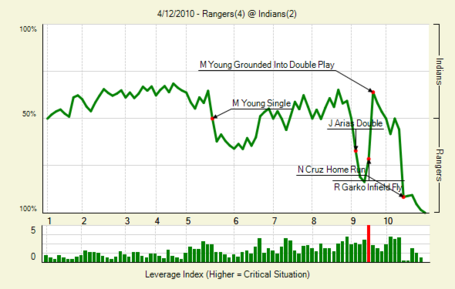 N.B: Today was my first time at an Indians home opener thanks to an invitation from the Indians. I sat at the newly created Tribe Social Deck, a 10-seat deck at the base of Section 180 in the left field bleachers, was given a media guide and press releases, and got to meet with nine other blogger and social media peers. It's anticipated that this area will become the social media analogue to the press box behind home plate, and a measure of how important the Internet  community has become for professional clubs. The Indians are the first MLB team to create something like this, and hopefully it will become a great success. Many thanks to Rob Campbell and Curtis Danburg of the Indians for the invitation and a first-class experience. 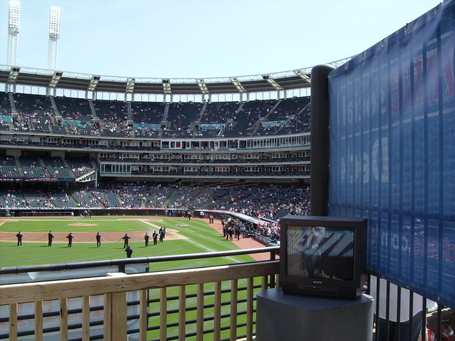 A view from the new Tribe Social Deck.