2010 is a new year.  In four 2009 starts against Cleveland, Justin Verlander gave up THREE runs in 30 innings.  Today, the Indians scored five runs off Verlander—all earned—in the first inning.  The Detroit pen later allowed a sixth run to score on Verlander’s tab.  That would not be enough.

New years sometimes look like old ones.  Jake Westbrook continued the string of passable but inefficient starting pitching performances by Tribe hurlers. He labored through 5 and 2/3 innings and battled some BB and HBP hiccups, but had an uncharacteristic seven strikeouts to keep the Tribe’s lead in tact.  His inability to work deep into the game meant the bullpen would be called upon to protect a 7-3 Tribe lead.  The bullpen, however, reached into its familiar bag of tricks.

Manny Acta was forced to use his relievers, but his choices were sometimes curious (letting Westbrook face Magglio a fourth time before calling on Jensen Lewis to face Miguel Cabrera; Laffey for one batter; Joe Smith getting the quick hook in favor of Rafael Perez despite three of the next four batters being right handed) and most times ineffective.  The pen walked seven batters in three innings, with Chris Perez contributing four of his own in between getting three outs in a failed four-out save opportunity.  After Perez walked in the tying run, Lou Marson allowed his second passed ball of the game, and the Tigers scored the winning run.

The Indians and Rangers open Progressive Field tomorrow, Monday, at 3:05PM EST.  The Indians need innings from their starters, and Fausto Carmona, the object of the eternally hopeful, takes a second shot at 2010.  Presumably, Mike Redmond will be doing the catching — no passed balls are expected. 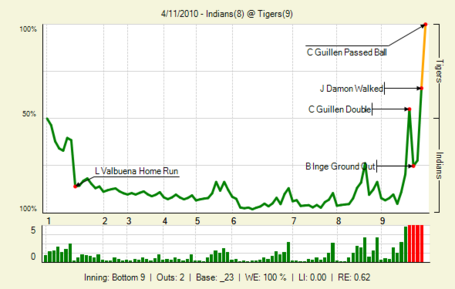