Mitch Talbot gave up four runs in his Indians debut, going five innings despite having to throw 38 pitches in the first inning and allowing 11 base runners. Mitch struggled to throw strikes in that first inning, and was very fortunate to escape the inning having just allowed two runs.

Despite some poor aesthetics, it's really difficult to criticize the pitching thus far when in four of the Indians' five games, the pitchers have given up five runs or fewer. Normally, in the American League, that's right around a team's offensive runs per game. At some point, the chances that each poor offensive game is due to a good pitching performance becomes more unlikely. Especially in a game like today's where Jeremy Bonderman went just five innings and three of the Tigers' key relievers were held of the action. A key moment came in the top of the eighth; with the Indians down just two runs, Tigers left-handed Fu-Te Ni hit two consecutive left-handed hitters, bringing up Travis Hafner and Jhonny Peralta (who faced Ryan Perry), both of whom went down swinging.

The Indians' bullpen again did very well, holding the Tigers scoreless for the last four innings of the game. Unfortunately, like yesterday, the Indians were already behind by that time. 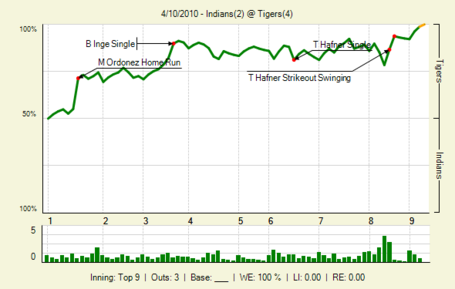