Numbers That Matter (Or Don't)

Share All sharing options for: Numbers That Matter (Or Don't)

With the Indians taking the field for the first time today, albeit in an intrasquad games, I was considering what was worth paying attention to during Indians Spring Training 2010. The answer, of course, is nothing. It's not difficult to find examples of spring stats that totally reversed themselves come regular season. Reasons for this abound and are obvious, from small sample size to biased samples as pitchers and hitters alike don't go full speed.

However, I'm going to look at something all March, if for no other reason than actual box scores involving actual players will be posted regularly. So, what will I probably notice?

Fausto Carmona's K/BB: As has been discussed around here in the last couple of days, Fausto exhibited excellent K/BB numbers in the minors, approaching and surpassing 3.0 in the high minors. Any chance for Fausto to return to the land of useful pitchers is going to hinge on his ability to actually throw strikes and thus induce a hitter to actually take the bat off of his shoulders. If Carmona can get rust covered major league hitters to believe his pitches are crossing the plate between their knees and letters, I'll be happy.

Carlos Carrasco's H/9: Entering 2009, Carrasco was considered an elite prospect, one of the best in the Phillies' system. He'd risen quickly through the minors but as he'd done so, he'd developed a predilection for giving up hits-lots of hits. His H/9 could've been featured on a helium watch as it trended upward as he advanced levels before finally exploding last year in Lehigh Valley, where he surrendered 9.3 hits every 9 innings. Most of his other peripherals essentially held or improved (good work on the BB's, decent on HR's, K's) but the hits were too much to bear and his ERA ballooned, his value plummeted, and he became an unlikely centerpiece in a deal for a reigning Cy Young winner.

Now, you can survive giving up hits (hey, Cliff Lee!), but it's not exactly a reassuring style and it helps if you've got a knack for grounders, which Carlos doesn't particularly. This is admittedly a rather fickle thing I've focused on but it fits with Carlos' scouting reports (straight fastball, weak makeup leads to grooving pitches while eyes well with tears) and the Indians seemed to have made inroads against Carrasco's issues in Columbus last year.  As a Clipper, he gave up only 6.6 H/9 and swelled his K/BB to over 5. There was a lot of luck in that showing but we've got to at least hope that Radinsky saw something and corrected it or, perhaps more likely, Pitcher Whispered our (other) young Venezuelan until he could operate his body like a piece of machinery from the safety of his superego.

David Huff's K/9: Huff, yet another of our "pitcher not thrower"(s) who can't "record outs at the big league level" has to find a way to sit guys down. He struck out a downright Sowersian 4.6 per 9 last season in the majors, this after posting an 8.1 K/9 in his impressive minor league career. Jeremy has never really approached a number that high above the low minors, so perhaps there is hope that we are not staring down the barrel of another left-handed cap gun. The list of guys since 2006 who've posted K/9 under 5 while working as starters isn't exactly filled with young Kerry Woods but it is filled with guys who figure out how to succeed occasionally (mostly by inducing GB's). That said, I think we'd all rather see Huff add some K's and some GB's as opposed to walking the tightrope that Joe Saunders and Jon Garland make their living on.

Justin Masterson's LHB/RHB Split: Masterson is a genuinely cool pitcher, a giant bald dude with a weird delivery and a live wire for an arm. The only problem is his decidedly uncool platoon split: LHB's devour Masterson like so many vultures on carrion and if he doesn't figure this out soon, he's going to have to rethink this starting pitching thing. If he can just get lefties a bit in check (like, maybe give up an .800 OPS instead of a .900 one, huh?) he can become an extremely valuable pitcher. His other big issue, control, stems from the platoon problem, as Masterson goes a 2.96 K/BB against righties, a 1.38 against lefties. I don't know how a huge righty sidearmer starts getting lefties out but I'll be watching to see if he does. Perhaps a trick pitch is in order. 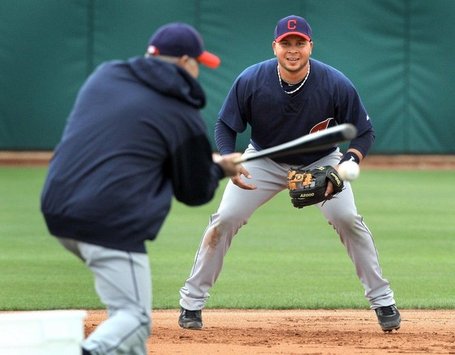 Matt LaPorta's ISO: LaPorta's calling card as a stud prospect was big bop, as in HRs and doubles. He was posting a .288 ISO for the Brewers' AA club when the Indians snatched him from the jaws of Milwaukee, and his power immediately went into decline. His ISO was bad in his short AA stint with the Aeros but it was back up to .231 in AA last year, and settled in at .188 as an Indian. That would make him a decidedly average LF power-wise and we'd like more, please.

Jhonny Peralta's SLG%: When Peralta was special, be it in 2005 or in the postseason, he's smoked the ball. This lines up with eyeball observations-Peralta's penchant for weak contact is apparent to the hardcore Indians' fan and his better seasons have been those in which he got extra bases with regularity (well, duh). The initial appeal of Peralta was founded on a number of things but a power-hitting SS was an easy thing to dream on. Five years on, we've got  a punchless 3B unless Peralta  can find a way to drive up his SLG and lower his IFFB%.

Those are some of the numbers that I'll be obsessing over for the next four weeks. What's on your list?