As we all wait for Adam's Early Weekend Six Pack, I thought it might be time to indulge in some small-scale fantasizing. We all want some obviously awesome things to happen this season: Fausto to become some version of his former self, LaPorta to make it obvious that there are no questions left to be asked, the Indians to contend into August (well, except for Jay, who wants these bozos to lose). But, I'm sure we all harbor smaller, more reasonable daydreams. Perhaps the emergence of Lou Marson as something north of Josh Bard wets your whistle. Or maybe you just really want to see a full-season from Lord Kelvin of the Cruzes.

Here's mine and it's an old one: I want Nick Weglarz to arrive in full. He's walked 9 times this spring while only striking out 3 times. He's hit the ball hard a couple of times. None of that means anything but it still fuels my fantasy that this is the year that I see the Wegz of my dreams: a .900+ OPS split between Akron and Columbus and a huge maple-syrup-sweet smile. By the way, if you 'neutralize' his stats last year, you might be led to believe that Weglarz is already here, minus the creepy smile part.

Maybe that's not such a small castle in the air but it's mine. What's yours? 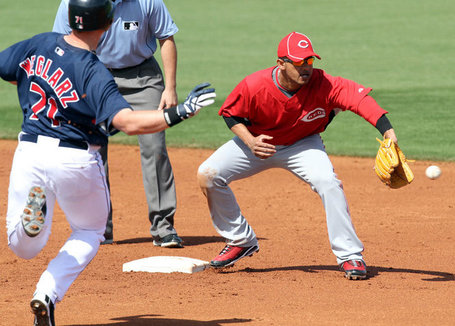 Photo by Chuck Crow via media.cleveland.com