Once again, feel free to use this week's edition of the early weekend 6-pack as a gamethread.

It is still early obviously, but Mitch Talbot, he of the zero remaining options, has so far performed the way you would hope.  If he continues his early success for the remainder of camp, the decision to give him a roster spot will be a no-brainer.  Here is what Shapiro and Acta said of Talbot following his last start.

"I've been impressed with Talbot," Shapiro said. "He has a looseness to his delivery. I've seen him go out without his best pitch, his changeup, and still compete in Glendale the other day. His slider has been surprisingly good. We had that as his third pitch. In talking to him, he hasn't thrown his best changeup yet, so that's a good thing."

As for Talbot himself, this is what he had to say about his best pitch, his changeup:

"It hasn't been my best pitch out here," he said. "In Arizona, the ball slips out, and it's harder to get a grip on it....The first one I threw went about three feet above the head of the catcher," he said. "But it had good action on it."

2. Maybe there is something to this getting off to a good start thing...

Although not too much.  Here is a chart of the Indians win% in their opening 10 games (x-axis) compared to their season win%. 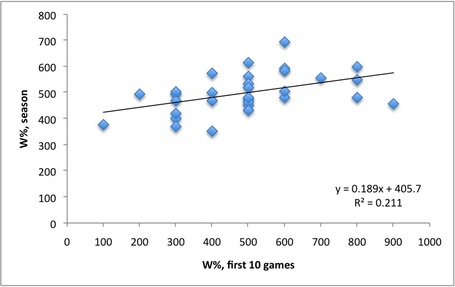 3. The race for the Indians spring HR title is intense

Currently the race is a 8-way tie between Brian Buscher, Asdrubal Cabrera, Nick Weglarz, Grady Sizemore, Jhonny Peralta, Shin-Soo Choo, Beau Mills and Andy Marte. The first of these guys to hit his second HR will move into a commanding lead.  For the record, Wes Hodges has a 3-2 edge in doubles over Chisenhall, Grudz, and the Carloses (Rivero and Santana).

4. The Indians starting lineup might be saving a few bucks on birthday candles.

Should Branyan start off the season the DL, which looks suspiciously likely, the Indians opening day lineup might looking something like this: Cabrera SS, Sizemore CF, Choo RF, Hafner DH, Peralta 3B, LaPorta 1B, Valbuena 2B, Marson C, Brantley LF.  The average age of this group would be 26, with just 3 of the 9 guys in their "peaks" (and 5 of the 9 younger than "peak").  Last year's starting rotation out of camp was Cliff Lee, Fausto Carmona, Carl Pavano, Scott Lewis and Anthony Reyes.  That group didn't stick together for long, but they had an average age of 28.  Subbing Huff and Sowers in for Lewis and Reyes gives you the five guys who made the most starts and an average age of 27.5.  Assuming the Indians break camp with a rotation of Westbrook, Masterson, Carmona, Talbot and Huff - good for an average age of 26.5.

5. Which of the following is most egregiously too long?

6. The sleepy kitten might want to drink a little warm milk before taking the mound.  Meanwhile, big Mr. Carsten Charles has not gotten any slimmer by the looks of things. Victor, on the other hand, appears quite svelte. I'm not exactly sure why carrying not one, but two emergency catchers on your roster can be considered a luxury.  How often has does any emergency catcher get used in a game, let alone two of them? Ben Francisco, meanwhile, appears to be settling into the role I always thought would best fit his skill set, NL 4th outfielder. 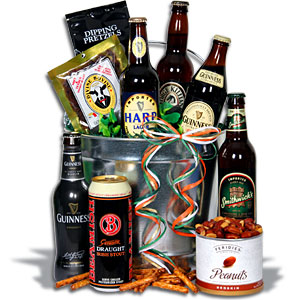