Michael Brantley: up, up and away

Share All sharing options for: Michael Brantley: up, up and away

Originally the (Sha)PTBNL, Michael Brantley is the other big piece - along with Matt LaPorta - from the CC Sabathia trade.  Like LaPorta, Brantley's success or struggle to find success will be a big part of the 2011 Cleveland Indians and the near-term future of the Tribe.  Brantley began to show signs of life in the latter part of the 2010 season, putting up a .292/.332/.390 line with 8 stolen bases during the final two months.  For Brantley to become a core part of the Indians team he will have to do better than that going forward.

What Brantley does extremely well is make contact with the ball.  Last season Brantley made contact on 96.2% of the pitches in the zone and only swung and missed at 2.7% of the pitches he saw.  Those are fantastic numbers.  But it is worth looking at what Brantley actually does with his contact skills.  For one, Brantley's excellent walk-rates have not yet translated to the big league level (>11% in the minors, <7% in Cleveland).  Second, Brantley's batting line actually improved as his strikeout rate increased late in last season.  It is possible Brantley makes contact too frequently, bringing with it the penalty of too often making poor contact.

Brantley's ball-in-play (BIP) numbers can be illuminating in this respect.  First, Brantley struggled last year with infield flies.  Infield flies are about as close to an automatic out as a ball-in-play can get, and Brantley's IFFB% of 13.4% is quite high (only Jason Donald and Jayson Nix put up worse rates for Cleveland).  I don't entirely know what contributes to infield fly rates, but I find it surprising that someone with as excellent contact skills as Brantley would put up such a high number.  I think of infield flies as, essentially, a mistake on the batter's part, resulting in off-contact between bat and ball.  I suppose one could make the argument that Brantley's contact ability leads to a high IFFB%, and that Brantley simply makes contact on pitches he shouldn't.  I don't know which is correct, but I am sure lowering this number will improve Brantley's overall line.  I also think this is something we are likely to see from Brantley.

The more challenging aspect of Brantley's BIP numbers is his GB/FB tendencies.  Brantley was an extreme GB-hitter early in his minor league career (70% during his rookie campaign), but has in the upper minors and majors brought that number down to at or just below 50%.  A lot of those groundballs have become line-drives (over 20% at the big league level), which is wonderful, as there is no more successful BIP-type than a line drive.  Brantley's line on line drives as a big leaguer is .658/.649/.816.  The bigger issue for Brantley is fly balls.  A guy with a 20% line drive rate, great contact ability and good speed should be able to put together a very solid batting line.  But part of what is holding Brantley back is exceptionally weak production on his fly balls (.085/.084/.189).  Fly balls less often fall for hits than other types of balls-in-play, but they go for HRs far more often...helping to make up the difference in value.  The problem for Brantley is that he doesn't hit HRs.  And in fact, not many of his fly balls drop in for hits either.  Brantley's fly balls just don't travel far enough or fast enough to produce good outcomes.  Brantley needs to improve his batting line on fly balls.  He needs to hit a few more that either sail over outfielders heads or, preferably, over an outfield wall.  This raises obvious questions about Brantley's power, or lack thereof at this point in his career. 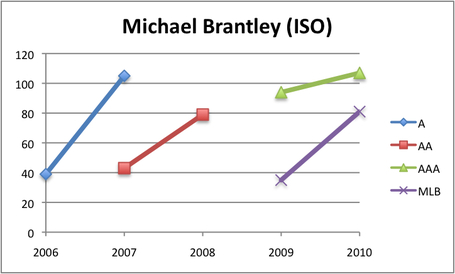 The ISO chart appears fairly clear.  Brantley's pattern, not surprisingly, is an initial drop in power upon promotion followed by a subsequent uptick.  That is certainly encouraging, in the sense that all the trajectories are headed in the right direction.  It is worth noting that Brantley's power, even at its best (repeat A, repeat AAA) has never been anything but below average.  Another way of interpreting these data is to say that Brantley power across his entire career does not provide strong evidence of an upward trajectory (his average ISOs by level, low to high, are; .064, .068, .099 and .069)  .  The picture becomes even more troubled if we look at two related measures of power, slugging percentage on balls in play (SLGBIP) and slugging percentage on contact (SLGCON).  From A-ball to the majors his SLGBIP numbers go .421, .381, .384, .364.  The same sequence on his SLGCON numbers goes .431/.400/.423/.387.  Brantley has done less with the balls he has hit as he has progressed.  With no upward advances awaiting Brantley at this point, that trend needs to start reversing itself.

I think it is difficult to confidently predict what will happen to Brantley's power numbers.  Brantley is enough of a line drive hitter that even if he doesn't increase his FB-numbers, but instead gets more out of them by hitting them farther, one could imagine his power increasing to at least average levels (ISO ~150). If Brantley can increase his power to those levels while maintaining his current batting strengths, there is a lot to like about him.  If he cannot however, if his max power really is in the low 100s, then Brantley will have to do all the "extras" well - base-running and defense, especially - to be of much value.

If Brantley does not develop power, he has the upside of someone like Marco Scutaro or Juan Pierre, only occupying a less valued defensive position.  That would not, I think, be a positve outcome.  If he can improve his power, cut back on some of the other negatives contributing to his batting line (IFFB%, BB/K), and stlll be effective defensively and on the basepaths....he could be very valuable.

Following up with LaPorta, there are the positve indicators I would suggest for Brantley.