Matt LaPorta is critical to the success of the 2011 Indians, and possibly the 2012-2014 Indians.  As the centerpiece of the CC Sabathia trade, LaPorta was supposed to bring a legitimate power threat to the Indians lineup.  His minor league numbers (.296/.390/.563, 56 HRs across 242 games, mostly at the AA and AAA level) certainly suggest he should be a real power threat.  But in 162 games split across two seasons, LaPorta has failed to show that power, with a line of .232/.307/.388.  To be fair, that is not horrendous power, but it is a pretty terrible all around batting line for someone with all around batting skills.  Injuries have of course been one possible excuse for LaPorta, with a series of minor to serious setbacks.  But I would suggest another, perhaps even more classic problem...he hasn't been able to hit major league breaking stuff.  Specifically, LaPorta's strong pull-happy approach leads to a huge number of weak outs to right field.

These two images (via MLB.com) should show some of what I mean: 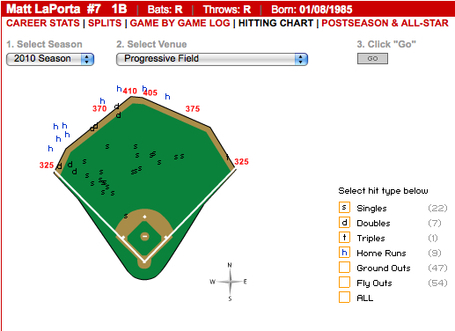 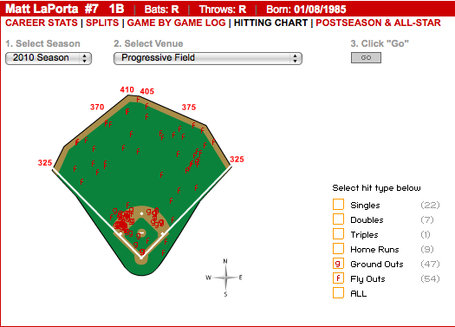 The first image shows LaPorta's hits in Cleveland in 2010, the second shows his outs.  Obviously, with the exception of a few singles and a freak triple, all of his hits are to center or left.  In fact, according to fangraphs split data, in his major league career so far LaPorta's line on balls hit to right field is .123/.120/.151.  In contrast, his lines to center (.376/.376/.624) and left (.332/.328/.588) are vastly superior.  He is an excellent hitter with good power to center and left, but he couldn't kill a butterfly on most of his hits to right.  And as the second image above shows, he hits a lot of balls to right.

It is probably not surprising that relative to his teammates, LaPorta sees relatively few fastballs. Across the past two seasons, he has only seen about 54% fastballs, well below league average and one of the lowest on the Indians team.  Instead of getting fastballs, LaPorta gets a relatively large number of sliders (~20%), curveballs (~10%) and changeups (~10%), and he struggles with them.  Fangraphs puts his run value relative to average on these pitches as right around -1 run/100 pitches.  I suspect the reason is that he has a hard time pulling these kinds of pitches and most of them end up as weak grounders and flyballs to the right side of the field.  I'd further guess that these problems don't manifest themselves as much in the minors because the quality of breaking stuff is not nearly as good.

Closely related to his struggles against breaking pitches is LaPorta's inability to control the inner half of the plate.  LaPorta struggles mightily on pitches in on his hands, showing an inability to turn on these pitches and instead producing weak opposite field hits.  The image below courtesy of foxsports.com shows this problem clearly: 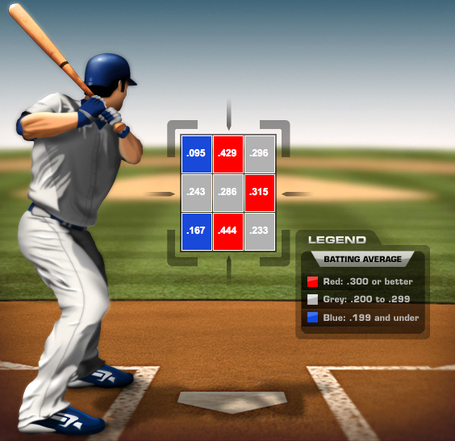 For LaPorta to become a good all-around hitter at the big league level he has to be able to better handle the off-speed and breaking stuff he is likely to face.  He also has to get better at turning on inside pitches or fending them off till he gets pitches he likes.  This does not mean he cannot be a pull hitter, but he either has to minimize the number of balls in play he sends to the right side or improve the outcome on those balls.