Indians of the Decade: The Sluggers

Share All sharing options for: Indians of the Decade: The Sluggers

The decade now ended was, for Indians' fans, bookended by two giant, corn-fed, hulking men. Men who hit baseballs with mirthful rage and elicited honest rage from many Clevelanders for totally different reasons. Jim Thome and Travis Hafner could rake.

In 2002, Thome's signature offensive season for the second half of his career, he should've walked away with the MVP-he was in the top five in the league in essentially every important offensive category and posted the third highest OPS+ in team history. It's an offensive season for the ages, the 25th highest OPS+ posted since integration. The icing on the cake, of course, is that it was a walk year and big Jim walked.

With Thome heading to Philadelphia on a six-year, $85 million dollar deal, first year GM named Mark Shapiro watched the "Most popular athlete in Cleveland sports history" walk out the door. Shapiro had correctly figured that a super-slugging 1B/DH was a piece that a team admittedly rebuilding didn't need at the price he could earn elsewhere. So, Shapiro moved on and within a couple of weeks did a little deal, swapping a couple of obvious never-will-be's for a garbage arm and a guy who was less obviously a never-will-be. And, incredibly, the storyline becomes that Shapiro's "replacing" Jim Thome, one of the three or four best hitters in franchise history. As if Einar Diaz could net you Jim Thome.

Einar did. Hafner was on the scene and looking promising by the very next season, a bona-fide slugger in 2004 and 2005 and then, in 2006, he popped off the 11th entry on that list from earlier and, for good measure, tied the MLB record for most grand slams in a season with six. And, with those good vibes flowing, Shapiro forked over a monstrous re-negotiation/extension the next July, promising Hafner nearly 60 million dollars for his next four years of work.

It's well known in these parts that Hafner was already showing some cracks when Shapiro rewrote his contract in 2007. Pronk had substandard, even submediocre, months in May and June and, at the time, there was speculation that his contract situation had weighed on his mind, that suddenly being worth eight figures instead of seven was going to free him of fiscal anxieties and allow him to start crushing the baseball again. There was also a hypothesis that the market would make Hafner's contract look small, even for a team like Cleveland, within a few a seasons. And, there was Jay calling Choo a "fungible asset."

None of those assertions holds up in retrospect. In an "Only in Cleveland" turn of events, Hafner's big contract marks the end of his time as a dominant player, perhaps even his time as an honestly good player. Before his extension, Hafner OPSed over 1.000 in 11 separate months. Since he attached his name to that piece of paper, he's done it once. There's a vortex of rationales and excuses surrounding Hafner's performance since that time, most eloquently summed up in Evan Dawson's excellent Hafner profile for the Indians Annual 2009, but the bottom line is that something very bad has happened to Travis Hafner's body or mind and it makes it impossible for him to consistently appear under the stage name Pronk. You'll probably watch Hafner for three more seasons and, more than likely, you'll watch him play less than a hundred games a year and hit like a good second baseman.

That's how the decade started and ended. With a truly great Indian hitter walking out and fostering incredible antipathy among fans and with the next truly great Indian hitter exiting stage left, inexplicably, never to be seen again. Hafner's extension, which was once trumpeted as a sign that Dolan and Shapiro were willing to spend big when they thought they were spending wisely, is now a warning sign for all Indians' executives, owners and fans. A lighthouse that cyclically reminds everyone that, no matter how well you think you've built your ship, it doesn't make much sense to sail as close to the rocks as the dreadnoughts from Boston and New York do. 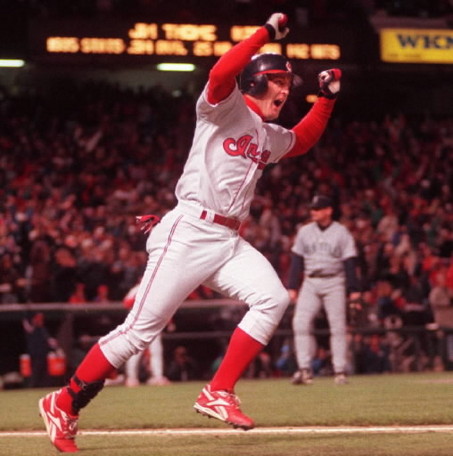