A couple hours before the first game began, GM Mark Shapiro announced that manager Eric Wedge and all members of the major-league coaching staff would not be back for the 2010 season. The move was expected, and hopefully it represents the first step towards a championship team. Wedge handled the firing with class, though you would assume it wasn't a shock to him.

The pitching performances in the doubleheader were promising as well. Fausto Carmona pitched well for the second start in a row, and Masterson was brilliant in the nightcap. These were the last starts of the season for the two pitchers, and they couldn't have ended their seasons on a better note. Carmona was efficient, showing flashes of how he pitched in 2007. He went seven innings, walking just two and striking out 5. In some ways these last two starts make his 2009 season even more maddening, for you saw what he was capable of.

In the first game, the Indians were paced by Matt LaPorta (1-1, 2B, 2 BB) and Travis Hafner (2-3, HR), who hopefully will form a formidable right-left power combination in next year's lineup. LaPorta's streaking towards a league-average OPS as the season is winding down, and even though he's made less than 200 plate appearances in the majors, he's your cleanup hitter next season.

Even though the Indians ended their home schedule with a loss in game two, Justin Masterson's gem of a start was a great takeaway. He struck out 12, walked 2, and pitched a complete game. He allowed only one run, but unfortunately neither Mark Buerhle nor three Chicago relievers allowed a single run. Masterson had struggled down the stretch, which made this start even more of a surprise. In his last start against Detroit, he couldn't make it through five innings, and he hadn't gone seven innings in any start this season. Cleveland's next pitching coach now has an archetype pitching performance to try to emulate next year.

Next Up: The last series of the season. Carrasco vs. Lester, 7:10 PM

Game Graphs and WPA leaders after the jump... 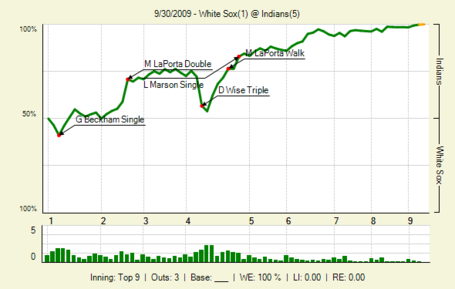 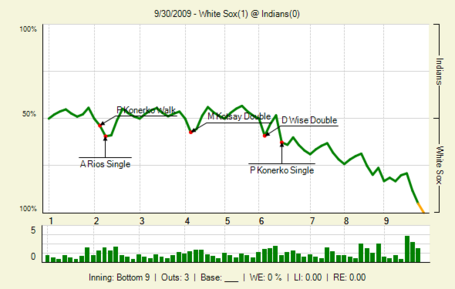