In the past couple weeks, the Indians have won a series against each of the three AL Central leaders, with two of them coming on the road. If this had happened, say, in May, then it would be a great sign for the season, that the Indians are for real, et cetera, et cetera. But what does accomplishing this feat after the roster's been torn apart, and there's nothing to play for? Does it reinforce the argument that Eric Wedge does his best managing with young rosters and no pressure? Perhaps. Does it mean that each of the AL Central leaders have major flaws? Absolutely. Does it mean that this team is good enough to challenge for the division title next season? Let's not get ahead of ourselves.

It was encouraging to see, at least in this series, that the starting pitching that's left still can hold its own. Jeremy Sowers has had his best run of starts in several years, culminating with Friday's outing. Justin Masterson acquitted himself very well in his first start as an Indian. And David Huff recovered from a horrible second inning and stuck around into the seventh today. Sowers and Huff were at the bottom of the spring starter depth chart, and Masterson was brought aboard a little more than a week ago after being a reliever all season, so the Indians did this with their C rotation.

On the offensive side, the same could be said about the fill-ins at the bottom of the order today as the three starters this weekend. Andy Marte at the beginning of the season was put through waivers, and passed through unclaimed. Luis Valbuena was brought up a year early, Crowe was on the straight and narrow path to failed prospectom, and Wyatt Toregas was just up here to fill in until Lou Marson came up. With the exception of Valbuena, none of these guys projected to be major contributors to the next good Indians team, even after all the trades. But today, these four drove the offensive attack, getting on base eight times between them. Jamey Carroll had one of his best offensive days of the season, hitting a two-run homer and a double. If the script holds, that means Jamey will be playing in another uniform before Tuesday's game. 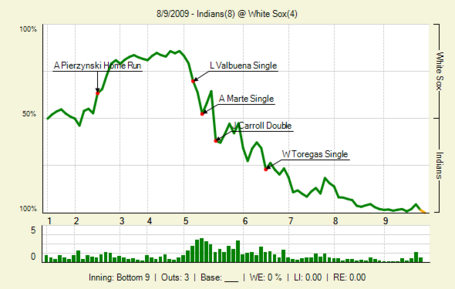