Tonight began with step 2 of Justin Masterson's conversion back into the starting rotation.  With Carl Pavano enjoying success in Minnesota, tonight's start fell to Masterson, though with a limited pitch count he was not expected to go deep into the game.  Masterson was as advertised.  He started off the first by giving up a few groundball singles (one which was almost prevent by an outstanding Valbuena-Asdrubal tag team effort), which together with a hit batter, gave the White Sox an early 1-0 lead.  From that point on he settled down pretty nicely, though.  His final line, 4 innings, 4 hits (Thome had the only extra-base hit off of him, a double), one walk, 4 Ks, and 7 of 8 in the field outs via the groundball.  The White Sox lefties went 3-10 off Masterson, with no walks and 3 Ks - all in all a solid introduction to the rotation.  And good enough to leave the Indians with the lead upon his departure.

The Indians took that lead in the third, courtesy of an Asdrubal single, Choo walk, and a Jhonny Peralta (and his recently found RBI-stroke) double.  The Indians increased the lead to 4-1 in the 4th via and RBI groundball by Sizemore and a single by Asdrubal, bringing home both Valbuena and Shoppach who had gotten on base with walks to begin the inning.  A Valbuena rbi-double in the 5th put the Indians up 5-1.  Just as Masterson's start was encouraging, so too is the continued good play of Asdrubal and Valbuena, who finished the game a combined 5-8 with 2 walks.  Since coming off the DL at the end of June, Asdrubal continues to OPS over .820, and tonight did not hurt that.  His double-play partner, Luis Valbuena, has put up an equivalent number over his last 20 games, stretching back to the beginning of July.

Moving into the fifth it was clear Tomo Ohka, not far removed from a scoreless four-inning effort on July 31st, would be replacing Masterson on the mound.  Ohka did not bring that success tonight, quickly giving up the 4-run lead while only managing to record a single out.  Jess Todd came in to put out the fire and did escape the 5th, but gave up a run to put the White Sox ahead in the 6th.  Raffy Perez, back from Columbus, gave up a run in the 7th, and Jensen Lewis, with the help of an error by Peralta, gave up one in the 8th. 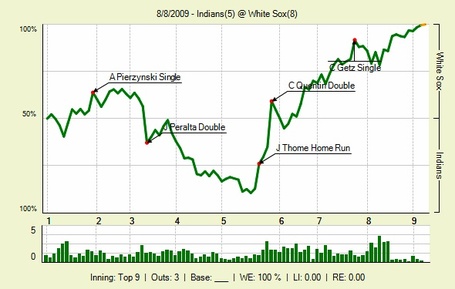