If the Indians hadn't traded Carl Pavano today, then Jeremy Sowers would have been relieved in the fifth or sixth inning by Justin Masterson. The Indians were going to deal Pavano anyway, so Sowers was probably going to stay in the rotation, but with Masterson's next appearance pushed off until tomorrow, Jeremy could go as long as he was effective. That turned out to be two batters into the eighth inning, as Jeremy stayed in the strike zone all game, keeping down the walks and his pitch count.

After retiring a MLB-record 45 straight batters, Mark Buerhle has been anything but perfect in his recent starts. The Indians scored six runs off him, and that run total could have been much larger had they not grounded into an AL record-tying six double plays. Kelly Shoppach led the way, hitting two home runs in his first two at-bats.

Sowers ran out of gas in the eighth inning, and the White Sox had their best shot of getting back into the game. Chris Perez came into the game, and although he walked the first batters he faced, got Jim Thome to swing over a slider and induced Paul Konerko to hit an infield popup. Tony Sipp then came in to retire AJ Pierzysnki, keeping the margin at four. 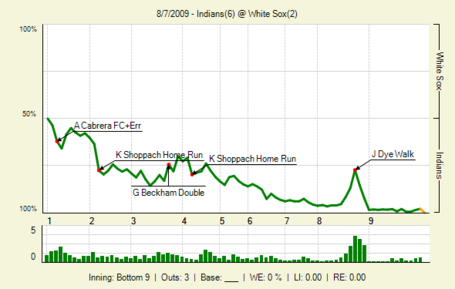