When the bullpen works like it is supposed to, beautiful things (and victories) are possible.  Fausto Carmona, making his second start since re-emerging from his Tribe farm system victory tour, managed to continually get himself in trouble, but also managed to effectively get out of trouble.  Fausto walked two in the first inning, but kept the ball in the infield with two groundouts.  The second began with another walk and a double, but Fausto again escaped unscathed with a strikeout and another groundball.  Fausto seemed to set up his own collapse with a leadoff double to Michael Cuddyer in the 4th, eventually allowing him to score on a wild pitch.  But Fausto didn't crumble - after the 4th Fausto stuck around for two more scoreless innings allowing a bunch of hits, but getting 4 groundball outs.

Nick Blackburn, who came into the game with a 4-0 record and general tendency to own Cleveland, was continuing on that path early on.  The Indians managed to bounce right back after falling behind 1-0 in the 4th with some solid base-running and hitting.  Asdrubal led the inning off with a double, advanced to third on a fly out from Choo, and scored in a close play at the plate on a sac fly from Jhonny Peralta.  Blackburn stuck around in the game just long enough to give up the go-ahead run on a Trevor Crowe double, bringing home Travis Hafner.

And the bullpen did what it was supposed to.  Tony Sipp came in and worked a clean 7th.  Coming out again for the 8th, Sipp got one out before giving up a single to noted Indian-killer Jason Kubel.  Wedge made the switch to Joe Smith who then made quick work of Michael Cuddyer and Joe Crede.  Kerry Wood, who hadn't pitched since August 1st, got the first batter of the ninth, Mike Redmond, to strike out looking on a knee buckling curveball.  Two quick outs later the Indians locked up the series victory over the Minnesota Twins. 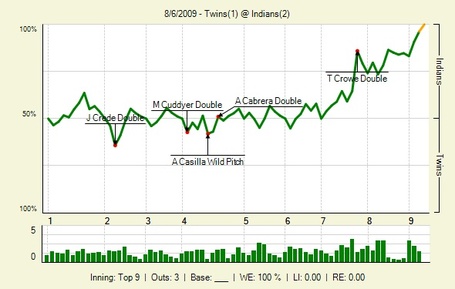