The season to this point has been a bit of a waste for Aaron Laffey. For the second straight season, he lost a battle for a rotation spot, so he started the season in AAA, only to get called up after Scott Lewis got hurt. After making four starts, he got shunted to the bullpen because he was supposedly good at warming up quickly. Then, in his sixth appearance out of the bullpen, he got hurt, and spent six weeks on the Disabled List. While he was on the shelf, the Indians saw that they didn't have five starters better than Aaron Laffey, so he was put back in the rotation when he was activated.

You would hope tonight's start would finally put to rest the annoying suggestion that Laffey belongs in the bullpen. Aaron went eight innings on 112 pitches, and even struck out five. He's been able to get hitters out the third and fourth time through the order, a step up from some pitchers currently in the rotation.

Trevor Crowe took another step towards being next year's fourth outfielder, getting on base another three times tonight. He hit ninth, which gave the Indians a nice run of base runners the second time through the order onward. Grady Sizemore and Asdrubal Cabrera both collected three hits, which helped to compensate for what looked like a rather thin lineup (Chris Gimenez and Jamey Carroll were the 5-6 hitters, for goodness sakes). 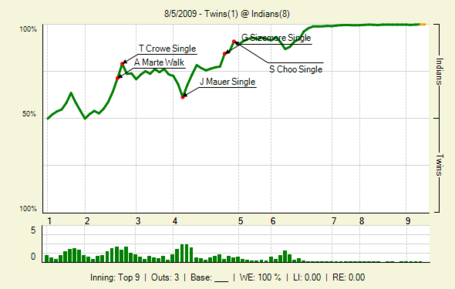