Today's game marked the last game before September, and before the active roster expands beyond 25. Because of that, success in the month of September does need placed in proper perspective because those late-season callups often are playing against other late-season callups. Given that, it was very good to see both Andy Marte and Matt LaPorta getting regular playing time before September 1st. Both players saw their 10-game hitting streaks end today, but their overall performances were encouraging. LaPorta (heading into today) hit .410/.400/.718 in 40 plate appearances, while Marte hit .299/.355/.493 in 76 plate appearances.

Brian Matusz, the fourth straight rookie starter the Indians faced, pitched the best game of the series. He allowed one earned run in seven innings pitched, striking out eight while walking one. Conversely, Justin Masterson, who had pitched well against the Orioles previously, pitched into the sixth but not before allowing 5 runs (4 earned) on 8 hits and 4 walks. Baltimore scored four of their five runs in the third inning, helped out by two Cleveland errors. Both of the errors came on base hits, with either a misplay or a wild throw allowed both batter and/or baserunner to advance.

After Masterson left, Rafael Perez pitched two perfect innings in relief. Getting Perez Left back into his previous form has been a year-long struggle for Carl Willis, but perhaps now, as the year's winding down, that elusive goal may be within reach.

Next Up: At Detroit on Tuesday. Carlos Carrasco (making his Indians debut) vs. Edwin Jackson 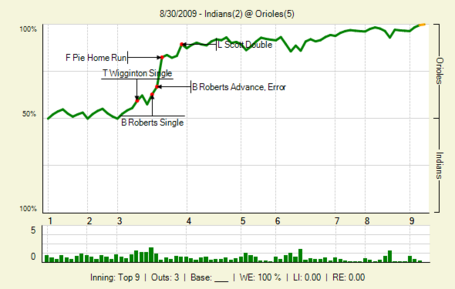