The major difference between the Indians of the first half and the Indians in the past month has been the bullpen. Early in the season, a rain delay in the middle innings with the score close would have meant an almost automatic loss. Now, with the bullpen stabilized, the Indians are winning these battles of the bullpens.

The Baltimore grounds crew quickly pulled the tarp over the infield in the bottom of the fifth, and the delay was long enough to remove both starters from the game. Jeremy Sowers had given up his second run of the game just before the game was delayed, so the Indians were behind when play removed. But the hot-hitting duo of Matt LaPorta and Andy Marte quickly changed, for after Luis Valbuena singled in the sixth, LaPorta followed with a single of his own, and Marte drove them both home with another home run. That margin was all the bullpen needed. Tony Sipp finished the seventh and the whole of the eighth, and Chris Perez pitched the ninth to notch his first save as an Indian.

LaPorta ended the game with a perfect 4-for-4 line, and both he and Andy Marte have hit in ten straight games. Both were moved up in the lineup tonight, though Marte still hit behind LaPorta. Two weeks' worth of at-bats shouldn't make a long-term decision, but at the very least Marte has hit his way onto next year's roster as at least a part-time player. The Indians had always seen LaPorta as a everyday player, and his recent hot streak has only reinforced those views. 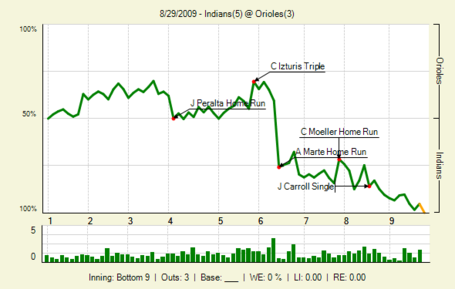