Of the multitude of players who joined the organization in the deadline week trades, Justin Masterson is the only one already with Cleveland.  He made his debut with Cleveland in Saturday’s 12-inning, 3-4 loss to Detroit, but Masterson himself got off to a great start.  While he has been used primarily as a reliever this year for Boston, Cleveland is hoping to stretch him out and return him to the rotation before the season is over.  In Saturday’s game, Masterson pitched three innings, allowing two hits, no runs, a walk, and four Ks. Here’s a little more info on the newest member of the Cleveland Indians pitching staff …

As many have noted, Masterson was actually born in Kingston, Jamaica, where his father was the dean of students at a theological seminary.  When he was still quite young the family moved to Beavercreek, OH, where he remained through high school.  Masterson pitched for San Diego State in college before being drafted by the Boston Red Sox in the 2nd round (#71 overall) of the 2006 draft.  While Masterson had a great debut campaign with the short-season Lowell Spinners, it was his 2007 season that put him on the baseball prospect map.  Beginning with a successful 17-start stint in high-A Lancaster (his longest continuous stint in the minors), Masterson spent his final 10 starts with AA Portland as just a 22-year old, pitching particularly well for the Sea Dogs (8.2 K/9, 2.5 BB/9, 68% GB, 3.08 FIP).

After the 2007 season he was listed as the Red Sox #4 prospect by Baseball America and was credited with the system’s "best fastball" (fellow Tribe acquisition Nick Hagadone was #8 on the list that year and #3 last year, credited with "best slider" in both publications).  Baseball America also identified Masterson as the #64 prospect in all of baseball that year.  That same offseason John Sickel’s, of SBN sister-site minorleagueball.com, had Masterson as the Sox #6 prospect and a "grade B" talent.  Kevin Goldstein, of Baseball Prospectus, had Masterson as the #3 prospect in the Red Sox system, listing him as a "Four-Star Prospect", and #53 in all of baseball.  Goldstein said that Justin’s heavy sinker was "arguably the best in all of the minor leagues."

By April 2008, when the Red Sox needed an emergency starter, Justin Masterson was ready to step in.  By June he was a regular part of the pitching staff, albeit with a move to a bullpen role.  The key to Masterson’s rapid rise and the key to his pitching success is something which should be familiar to Cleveland fans, an excellent 2-seam fastball with great sinking movement that sits right around 90mph.  This graphic from Baseball Prospectus provides a nice summary of Masterson’s repertoire. 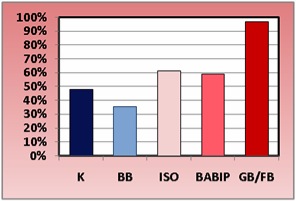 He has just average strikeout ability and occasionally poor control, but he has a great deal of success at inducing groundballs.  In the minors, his GB-rates varied from a very good 56% all the way up to an incredible 70%.  Coming up in the Red Sox system, this drew a lot of comparisons to Derek Lowe.  With the Indians, the more apt comparison is Jake Westbrook.  At the moment, however, Masterson doesn't quite have the full complement of pitches that Jake does.

Masterson is a big guy, listed now as 6’6" 250.  He has an interesting low-angle arm slot which helps him generate his tremendous sink (see below).  This approach is particularly tough on right-handed batters, but makes him vulnerable to lefties.  In his minor league career he showed stretches of struggling against lefties, while always dominating right handed batters. In his major league career thus far he has held right handers to an impressive .594 OPS, but allowed left handers to hit a worrying .820 off of him.

While Justin’s fastball is clearly an effective major league pitch (especially against right-handers), his secondary stuff could still use some work.  Working out of the pen, Masterson has essentially become a two-pitch pitcher, complementing his sinker with a slider.  The slider is less consistent than the 2-seamer and, when it is flat, is an attractive pitch to hitters.  His changeup, which he rarely uses in relief, is much more of a work in progress and will likely become more important as he transitions back into the rotation and faces batters two and three times a game.  How well he can develop these secondary pitches may determine what kind of a ceiling Masterson has and where he is "slotted" in the rotation.  Having just turned 24 in March and barely 3 years of professional baseball, Masterson certainly still has time to develop these pitches, though he’ll likely have to do so at the big league level.  According to a Boston Globe article, before the season, when the Red Sox were still unsure whether to use Masterson in the rotation or in the bullpen, pitching coach John Farrell had three goals for Justin:

1. Stretch him out so that he'll be able to return to the starting rotation if the need arises;

2. Get him back to using his full windup, something Masterson abandoned when he went to the bullpen;

3. Get him to use his changeup more. Masterson was primarily a fastball/breaking ball pitcher in 2008.

I assume the Indians will be following a similar plan.

One attractive aspect of Masterson for Cleveland is his contract status.  Coming into 2009, Masterson had 108 days of service time, meaning he shouldn’t become arbitration eligible until after the 2011 season, and he's under contract through 2014.

Masterson’s demeanor on and off the field has allowed him to earn the trust and respect of both fellow players and coaches.  It is worth noting that despite his young age, Masterson is coming to Cleveland with playoff experience.  Masterson made 9 appearances in the 2008 post-season, picking up a victory in relief in game 5 of the ALCS against the Tampa Rays.  In the same Boston Globe article listed above, Red Sox manager Terry Francona had this to say regarding the use of Masterson in the post-season:

"There was just no reason not to give him the ball with the game on the line. He was gonna throw the ball over the plate. He could get you the ground ball, he could get a strikeout. He really seemed to rise to occasions."

Hopefully Masterson will have the same opportunity, and the same success, here in Cleveland.  Welcome to Cleveland, Justin.