The Indians had a couple chances to stay in the ballgame for at least a couple innings longer, but the game would eventually get put completely out of reach in the late innings.

Fausto Carmona brought the same gameplan to the mound tonight as he had used in his last outing, but this time his location wasn't on. Tonight the four-seam fastballs weren't on the corners, but in the middle of the plate, and he often wasn't able to use his sinker or changeup because he was behind in the count. He couldn't make it through the fifth, and this time the bullpen couldn't hold the Orioles down long enough for the Indians to mount a comeback.

The offense missed some golden opportunities, but there were some bright spots. Matt LaPorta went deep again; he was one of four Indians with two hits. Andy Marte got on base twice, and looks like he's gotten a lot more comfortable with consistent playing time. 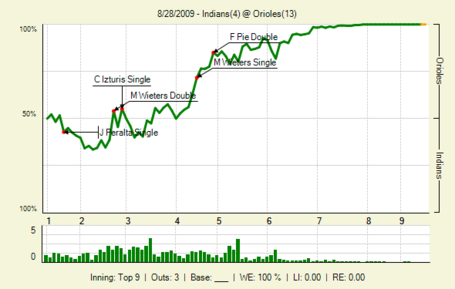