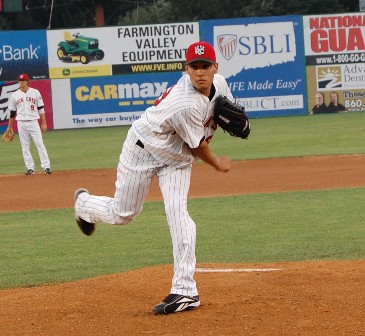 The AP is reporting that the Twins have sent RHP Yohan Pino to the Indians, as the player to be named in the Carl Pavano deal.  Pino, who turns 26 in December, has split the year between Double-A and Triple-A, and also between the rotation and the bullpen.  His cumulative numbers on the year are 3.03 ERA, 8.6 K/9, 2.2 BB/9, and 1.11 WHIP.  He reportedly will join the Columbus rotation this weekend.

Pino has always been a Fausto-like enigma, only for the opposite reason:  He's struck out a ton of guys without tremendous stuff, evidently succeeding with deception and excellent command.  He was threatening to enter the Twins Top 10 list after the 2007 season, largely on the strength of a July no-hitter in High-A, but he struggled to adjust to Double-A in 2008.  He was featured just eight days ago in this brief report by Kevin Goldstein of Baseball Prospectus:

Pino earned some attention when he was first coming up after putting up sub-two ERAs at both Low- and Hi-A, but scouts wondered if his combination of outstanding command and sub-par stuff would play at the upper levels. Those concerns turned out to be legitimate, as Pino struggled at Double-A for two years while also dealing with the occasional injury, but he's beginning to put together his first impressive run at the upper levels. Scouts don't see him as much more than a workhorse type of middle reliever, but at least things are moving in the right direction.

Pino has never been on the 40-man roster, but he'll need to be added in November in order to avoid exposing him to the Rule 5 draft.  Given his modicum of youth, effectiveness, and versatility, he seems like a fairly likely selection if left unprotected.