For eight innings and two outs it was a typical baseball game.  Laffey was satisfactory, making it into the sixth before his questionable control on the evening caught up to him, leaving the game with three runs, two earned.  Jess Todd relieved him and got into his own trouble, giving up a run in the 7th to put a fourth run on the board for Baltimore.  Grady Sizemore led off the game with a HR to give Cleveland its first run, an Andy Marte triple in the fifth led to a second run, and a Choo double brought home a third run in the eighth.

And there was the game in the ninth inning, 4-3 Baltimore lead with Baltimore closer Jim Johnson on the mound.  Valbuena grounded out to start the inning, followed by Peralta.  And then recently recalled rookie Matt LaPorta came to the plate.  LaPorta worked the count full, battling off a two-strike seventh pitch foul before hitting the eight pitch up the middle of the infield into center field for a single.  That brought up Andy Marte with a man on, two outs, down by one, top of the ninth.  Suddenly in the lineup everyday Andy Marte.  Former top prospect Andy Marte.  Famed domino player Andy Marte.

Ball one.  Ball two.  Ball three.  Maybe he'll walk, put the game into Grady Sizemore's hands.  Called strike one on the outside edge of the plate.  Low and inside fastball Marte hits foul for strike two.  Oh no, not another one of those games.  Not another failed opportunity for Marte.  Not that ending again.  Nope.  Andy Marte delivered the 3-2 pitch to the left field stands giving the Indians a one-run, ninth inning, come from behind lead.  Kerry Wood then came through and delivered the bottom of the ninth for his 17th save on the season (and 42nd game finished, not that anyone's counting). 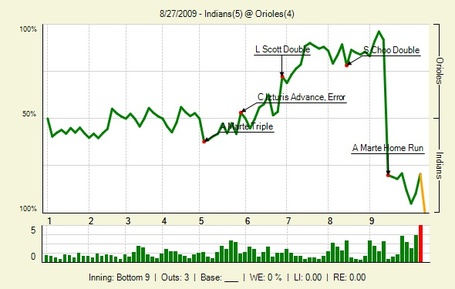