David Huff gave up two earned runs in six innings of work today, which will probably go down as one of his better outings of the year. Yeah, it came against one of the worst offenses in baseball, so there's some markdown for degree of difficulty.

(On a side note: what would Zack Greinke's stats look like if he had 3-4 starts against his own team?)

Matt LaPorta went 2-for-4 with a home run, so he's now collected at least one hit in each of his seven games since coming back. It's too bad it had to take Trevor Crowe getting hurt for the Indians to finally to call him up. No, I'm not all that devastated that Crowe is out.

With the series win against the Royals, the Indians have now gone almost two months since dropping a series to a losing team. 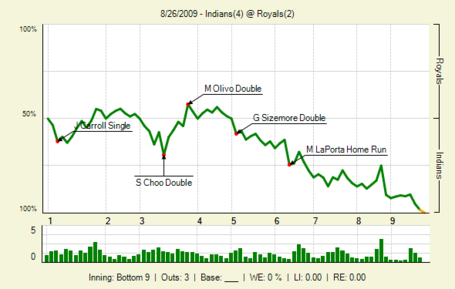