In his previous start, Justin Masterson gave a good look at what he is capable of, going 6+ innings without allowing an earned run.  Tonight he showed that as a starter and a major league pitcher, he is still quite inexperienced and a work in progress.  Through the first four innings tonight Masterson was having trouble locating his pitches, trouble getting lefties out (which Kansas City made sure to stack their lineup with), trouble holding runners, and trouble fielding his position - all of which contributed to a 4-0 Royals lead.  That it was only 4-0 was somewhat remarkable, but owed something to Masterson's ability to induce a couple of timely double-plays and some great defense behind him courtesy of Luis Valbuena.  When Justin came over to Cleveland one of the things he was praised for was his maturity and he showed it tonight.  After those early struggles Masterson retired his last 8 batters, 3 of them on strikeouts, leaving Cleveland within striking distance at 4-1 after the 6th.

The Royals starter, Zack Greinke, was once a work in progress.  A former top prospect, as recently as 2006 Greinke was struggling both personally and professionally and was nearly out of baseball altogether.  Tonight he gave one of the best performances ever by a player in a Royals uniform.  Greinke ended the first with back-to-back strikeouts of Jamey Carroll and Shin Soo Choo and never looked back. By the time he struck out Andy Marte in the 8th inning he had set a franchise record with 15 Ks.  Showing impressive discretion, Kansas City manager Trey Hillman elected to not put Greinke out again in the 9th, having already set a season high in pitches thrown, despite Greinke still looking capable of K'ing Indians.

The Indians never mounted much of a rally on Greinke.  Their first run came when Andy Marte led off the 6th with a no-doubt home-run to left field.  Just before he struck out in the 8th, Marte was a couple yards wide of the foul pole from having his second round-tripper of the evening.  The Tribe's second run came in the 8th when Matt LaPorta, who had doubled to lead off the inning, scored on an Asdrubal Cabrera double (who was thrown out in a misguided attempt to stretch the double one base further). 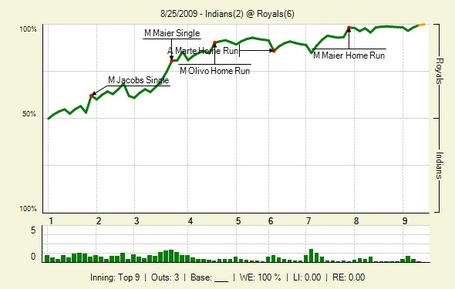