It's been really fun watching this team over the past couple weeks. Matt LaPorta was finally brought back, this time to stay. Chris Perez and Jess Todd, both received from St. Louis for Mark DeRosa, have quickly become the seventh and eighth inning men in the bullpen. After getting regular playing time, Andy Marte is starting to hit. And Luis Valbuena has hit .297/.360/.495 since the All-Star Break. Some year I wish I felt this good about this team early rather than late.

Tonight's game was a contrast in rebuilding teams. The Indians cratered in June, and despite a couple of roster-rending trades, have slowly but steadily improved since then. The Royals, on the other hand, started well but have inexorably sunk since. The pitching staff that carried an inept offense has stumbled, and that fall off has taken the rest of the team with them.

Gil Meche, who hadn't even pitched into the seventh inning since the middle of June, went seven tonight. Royals manager Trey Hillman, knowing how bad the Kansas City bullpen has been, elected to have closer Joakim Soria attempt a two-inning save. The move, like many others he attempted tonight, backfired in a spectacular way. After Soria retired Shin-Soo Choo, the next three Indians reached, culminating in a Luis Valbuena lead-taking three run homer. The Indians would add another three in the ninth off the Royals relievers who probably would have pitched the eighth, somewhat vindicating Hillman's strategy. In that frame, Asdrubal Cabrera showed like he was going to lay down a sacrifice bunt, but instead pulled the bat back a line a breaking ball down the line, scoring the runners he was going to move over.

Jeremy Sowers pitched well until the fifth, where he allowed a quick four runs to score. He did stick around through the seventh inning, but by that time he had given up a fifth run, and left trailing 5-4. Thanks to the Indian rally off Soria, he came out with a win, but he didn't pitch well considering the opposition. 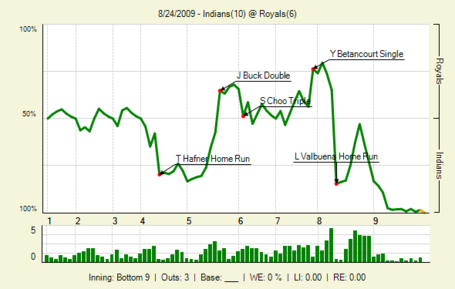