What Is Going On With Fausto Carmona?

Share All sharing options for: What Is Going On With Fausto Carmona?

As I wrote in the recap today, I'm pretty befuddled by what's going on with Fausto Carmona lately. I'm hardly alone in watching Fausto closely this season and primers on his performance thus far can be found here and here. In his start today, Fausto struck out 8 batters over 7 innings; this is an anomaly in the context of his whole career. Fausto has struck out 7 or more only 7 times in his career. His bread and butter has always been a dominating sinker and, as junkballer pointed out in fwembt's fanpost and Fangraphs noted in a separate article, he appeared to be relying on it even more as he struggled in the early part of this season.

However, the story at this point has changed. What's notable right now is Fausto's not throwing the sinker, a pitch that was once his entire story. In his best season, 2007, Carmona had only one start in which he induced more flyballs than groundballs: a one-inning exercise in self-immolation against Oakland. In 2008, Carmona struggled mightily but still maintained a groundball percentage of 63.5%. Before today, that same statistic for 2009 had tumbled to 55.6%. Let me just emphasize that this is not a pedestrian number of groundballs: Carmona would still be one of the most extreme groundball pitchers in the league if he were qualified.

However, it is a number that looks like it might be falling even lower: since his return from the minors, Fausto has posted a 51:42 GB:FB ratio, a number that matches the ratio of Javier Vazquez and John Lackey, guys who deservedly have no reputation as groundball artists.

What in the world does this all mean? Well, let's take a look at a classic Carmona start. On May 20 of this year, Fausto went 6.0 innings againt the Royals. He didn't pitch partiularly well but he did present the peripheral that has generally been indicative of a "succesful" Carmona start: a 4 to 1 ratio of groundballs and flyballs. It appears that pitchFX generally has a problem classifying Fausto's sinker but, assuming that groundballs equal an increased use of the sinker and that an increased use of the sinker is indicated by working lower in the zone, it's instructive to just look at Carmona's clusters. Here's Fausto's start on the 20th, 107 pitches: 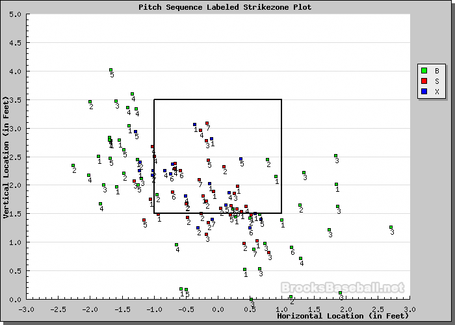 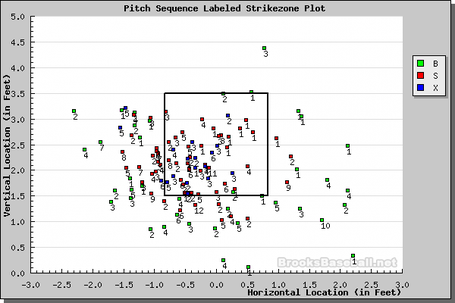 Pretty jarring. He's clearly working in more of the zone, expanding his pitches to the middle of the plate and even elevating relatively often. He's also clearly just in the zone more, period.

But what does he throw where? Again, the groundball heavy start against the Royals first: 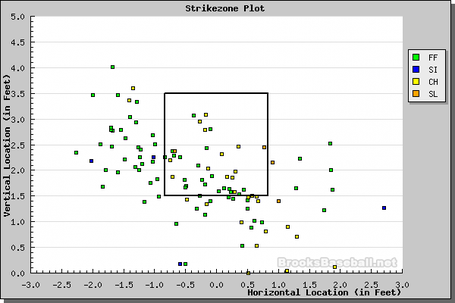 Doing a little counting, it looks like Carmona elevated his changeup more often than his fastball but, well, he hardly elevated either. Clearly, he threw the fastball low in the zone and if he missed higher, he missed high off the plate. 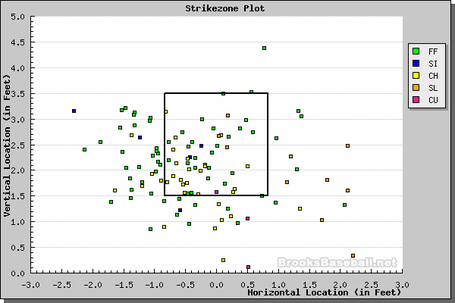 His start against the Royals: 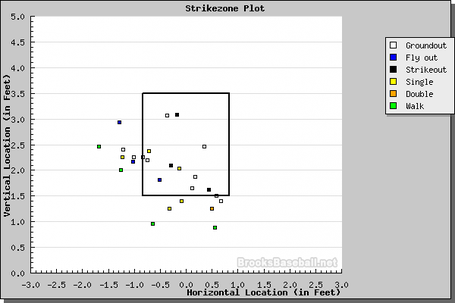 The groundball outs come from a combination of the bottom of the zone and coming off the plate, assumedly coming in and busting righties on the knuckles. His minimal strikeouts weren't distributed in any way. More or less what we would've expected. 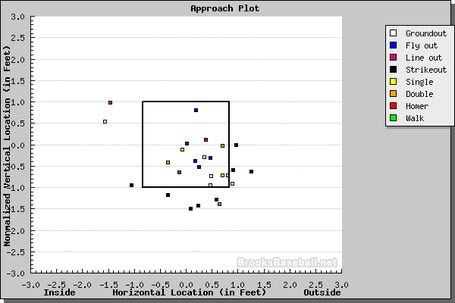 The groundballs have moved to the other side of the plate and the strikeouts are at the bottom of the zone. Groundballs first: Fausto got his groundball outs today against lefties, almost exclusively, so it's not surprising that they came from working the right side of the zone, inside against lefties. The strikeouts: they were equal opportunity lefty to righty, with three righties sitting down and five lefties. They also came on a variety of pitches: five by fastball, two by changeup, and one on what's deemed a sinker (an 89 mph pitch). However, by location, seven of the eight were clearly low in the zone.

I'm not prepared to synthesize all this information and I'm also not prepared to say that it isn't just a fluke run in what's going to be a career for groundballs for Fausto Carmona. However, after watching Carmona today, he looked fundamentally different than he ever has. Are we entering a part of his career in which we can no longer determine if he will be successful simply by looking for groundballs? With his plummeting groundball rates does it make sense to look for groundballs at all? Is this new model of success, with an expanded use of the zone, one with which Carmona can succeed long term? Aren't the homeruns (only one in his last 29 innings) going to be a problem soon? Is the sinker ever coming back? Was the pitch on which he got seven low-zone striekouts today a version of the sinker?

Does anyone know what's going on with Fausto Carmona?