The Tribe was clicking on all cylinders today, led by a 7.0 IP, 8 K outing from Fausto Carmona. It's hard to spin Fausto's outing as anything but positive: in a season where he's walked more batters than he's struck out, Fausto posted and 8:1 K:BB ratio today. Bearing that in mind, it's still worth pointing out that Fausto had a 6:7 GO:FO ratio. What, exactly, is going on with Fausto remains a mystery; he worked like a different pitcher than I've ever seen today, using his fastball to set up his changeup as an out pitch. The sinker was not featured. I'm not sure what the future holds for Fausto but his breaking stuff looked good today, as did the changeup, and it's always refreshing that he can routinely work in the low to mid-90s, unlike so many Indians' starters.

The offense had a great outing against one of the best pitchers in the AL, Felix Hernandez. LaPorta and Marte both had key hits in the four-run 6th; Hafner, Valbuena, Peralta, and Sizemore all had two hits and Sizemore and Valbuena especially are looking like they will be able to be key contributors to the offense in 2010.

Chris Perez and Sipp finished the game after Fausto's solid 7, with Perez striking out two in the ninth. The bullpen in 2010 might be terrible but it'll at least be fast. 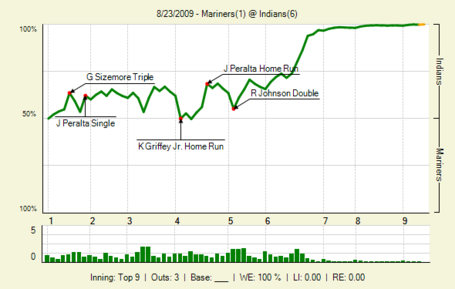