After giving up three first-inning runs, Aaron Laffey and the rest of the Indians pitching staff held the Mariners off the board. Aaron had his share of troubles, giving up 10 base runners in his seven innings of work. But he kept the Indians in the game, and when Michael Saunders couldn't catch a relatively routine Luis Valbuena fly ball, the Indians were in a position to tie the game.

The most dramatic change as the season has gone on has been the bullpen's metamorphosis from basket case to a genuinely promising group of young relievers. Chris Perez, who has quickly become the top setup man on the team, recovered after giving up a leadoff double to retire the next three Mariners in the eighth. All three outs (two strikeouts and a fly ball) came with a runner on third. After Wood pitched the ninth, Eric Wedge went with matchup baseball, bringing in Tony Sipp, then Joe Smith, and finally Rafael Perez. Perez has been torched by left-handers this season, gave up a hard-hit single to the left-handed Saunders, but somehow got Ichiro to pop up harmlessly on a 3-0 pitch to end the top of the eleventh.

The Indians finally broke through in the bottom of the inning, when Luis Valbuena hammered a walk-off homer down the right field line. 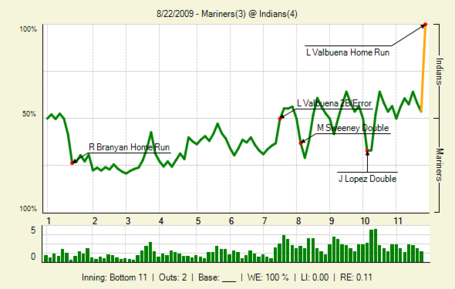