After a 1-2-3 first inning, David Huff got into and remained in trouble for the rest of his short outing. Two walks to lead off the second lead to a run, and would have been worse if not for a line drive double play. In the third, he allowed four straight Mariners to reach base after he retired the first batter of the inning. This time Seattle scored twice. Finally, he gave up a home run and double in the fourth, and that was it for him. Huff probably should have been pitching in AAA all season, so it's too early to write off Huff from the rotation of the future. But his struggles in 2009 will probably mean he'll have to work his way back of the depth chart next spring.

The Indians scored four runs, but three of them came after the game had been largely put out of reach. Andy Marte drove in two of the runs, including a game-tying tally in the second. 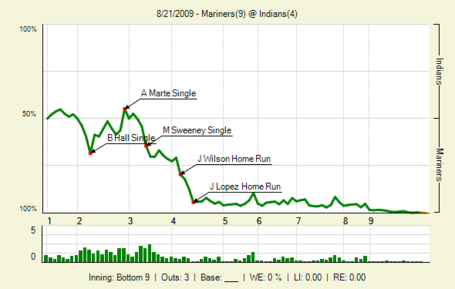