1. The Indians win the award for AL Central horse-trader.

Here are the comings and goings since the Indians shipped out Mark DeRosa on June 27th.

Those are the only two names that scare me from our competition on the above list.  The White Sox are on the hook for 3-years and $52M for Peavy for 2010-2012, with an additional $4M buyout on a $22M 2013 option.  For Rios, it is 5 years (2010-2014) and $58.7M plus a million dollar buyout on a $13.5M 2015 option.  Peavy is on a rehab assignment at the moment, but before that was actually putting up the best strikeout rate of his career.  He'll start next season still at the tender age of 28, but with more than 1300 innings on his arm.  Peavy's ability to keep the ball out of play is his biggest asset, but he also has historically had moderately high FB%, which will play differently in Chicago than it does in San Diego (Peavy's HR-rate has always been very good, but has also been almost twice as high on the road as at Petco).  Rios is a more complicated story.  Rios is actually a few months older than Peavy, but will still have just turned 29 for the start of the 2010 campaign.  He was in the midst of a down year in Toronto, making his contract seem particularly egregious to some.  But the White Sox are transitioning him from RF, where he spent most of his time in Toronto and where he put up stellar defensive numbers, to CF.  It is entirely possible, especially playing in US Cellular, that Rios will look like one of the all around best CFers in the AL next season (it's also possible his decline will continue and he'll be getting on-base at something less than a .300 clip).  Baseball trades are not typically viewed like trades in basketball, where the winning team is usually considered the team that got the best player at that moment.  But what the White Sox did is acquire the two best players new to the AL Central mid-season, who also happen to be in their late 20s and under control for 3+ more years.

That's from Matt LaPorta's twitter feed.  Here he is enjoying his new home: 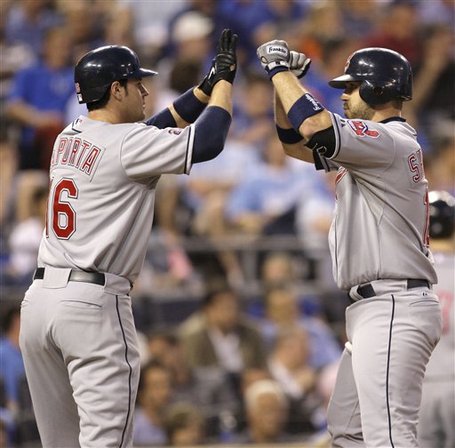 With Chisenhall in Akron now and Abner Abreu on the DL, Recknagel and Sheldon have been our best hitters at Lake County and Kinston (each with an OPS of .803).  Recknagel is an old (23.3) DH/1B who is now struggling in Kinston, and Sheldon is a super old (26.5) 1B who has suddenly found a power stroke with Kinston.  There a few moderately interesting guys floating around those rosters (Bo Greenwell, Delvi Cid, Tim Fedroff, Karexon Sanchez), but as I mentioned in a different thread, no one who you place a smart bet on at this point.  A year from now that might be different, but I wouldn't mind seeing some priority placed on a few positional prospects next year after the bevvy of pitchers this season.  Or maybe Jason Kipnis, Kyle Bellows, Jordan Henry and Alex Monslave will really surprise next season.

Another interesting name to look at is Francisco Jimenez.  A little (5'11", 165) LHP out of the Dominican, Jimenez made his stateside debut with the AZL Indians in mid-summer, quickly earning a promotion all the way up to Lake County.  Working out of the bullpen, Jimenez has struck out 47 and walked just 4 batters in more than 36 innings between the two stops.  Batters in Lake County are hitting just .186 off of him.