If tonight was a look at the future - and with Justin Masterson on the mound, an outfield of LaPorta, Sizemore and Choo, and Cabrera and Valbuena manning the middle of the infield, it sure looked like it - the future is looking a lot nicer than the present.  When the game's final pitch was thrown, an 86 mph slider from Rafael Perez breaking down and in on Robb Quinlan for strike three, the Indians had a solid 11-3 victory.

Justin Masterson was pitching for the first time unencumbered by a pitch or inning count.  A Valbuena error and Kelly Shoppach passed ball led to an unearned run in the first, but Masterson settled down solidly after that.  A Grady double and Choo single tied it up in the bottom of the first, and before long it started to look like it was a pitcher's duel.  Heading into the bottom of the 6th it was still a 1-1 game, with each team only managing 2 hits.  Masterson was wild, but effectively so, inducing a lot of groundballs and keeping the ball down.

In the bottom of the 6th the game changed.  Not surprisingly, Cabrera and Peralta got on base.  But in a rare turn, Hafner came through with an extra-base hit.  But the real fun came two batters later, when newly promoted LaPorta hit and 2-run double.  That was followed by an RBI hit from Marte, a single from Grady, and a 2-run double from Asdrubal.  Seven runs later the game was blown open.  An ill-advised decision by Wedge to leave Masterson in after two runners got on in the 7th gave Tony Sipp the opportunity to come in with the bases loaded and one out.  A strikeout and flyout later, he left 3 men waiting.  For a night, it was good times. 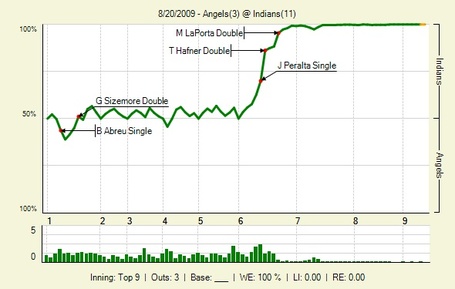