While the Indians offense took apart Armando Galarraga, Carl Pavano worked his magic on Detroit's lineup. Pavano, who's pitching not only for his next contract, but for perhaps other teams, went eight strong innings, throwing exactly 100 pitches.

For the Indians, Asdrubal Cabrera and Grady Sizemore had the biggest days at the plate. Cabrera hit a two-run homer in the sixth, and collected two more hits and a walk. Grady also hit a two-run homer. Jhonny Peralta and Luis Valbuena both had two hits, Agent M got on base twice, with one coming on a two-run double. 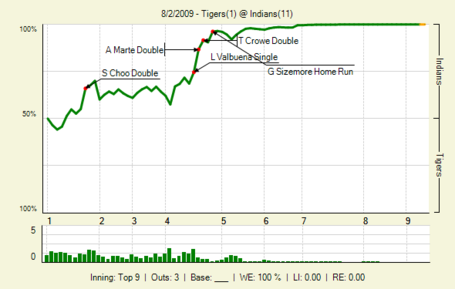