In the continuing conundrum that is the Indians' 2009, the bullpen was again outstanding tonight: a hitless 2.1 inning performance that featured three strikeouts was turned in by Chris Perez and Jess Todd. All that was for naught though as Jeremy Sowers, after flirting with a no-hitter, again ran into trouble in the dreaded fifth. Despite that, Sowers' final line was decent: a 6.2 IP with only the three earned.

Sowers is still doing this with smoke and mirrors; he had five walks and two strikeouts tonight. I can't imagine Jeremy has a future as a starter in the AL even if he's occasionally able to cobble together a run of starts like he's on now (32 IP and only 11 ER over his last 5 starts). Sowers does still have incredible numbers through his first four innings this year; he's certainly not that good but it's probably worth the effort to try to convert him into a reliever over the offseason by making him do whatever exercises one does to improve warmup time. 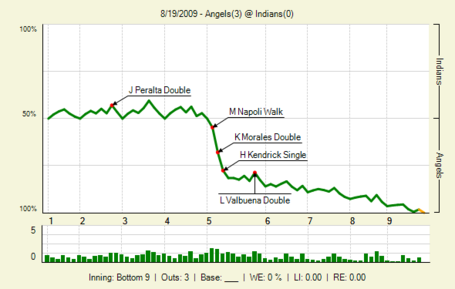