Fausto Carmona didn't pass tonight's test against a hot Angels lineup. He gave up 10 hits and 2 walks in five innings of work, and five earned runs (three of them earned). His troubles really started in the second inning, when Andy Marte botched a bouncer with two outs. A run scored on the play, and the next hitter drove in the second run of the inning. But even in his scoreless innings, it took too many pitches to retire the side, and by the time the fifth inning rolled around, he was already approaching 100 pitches.

But even though the Indians gave were down 5-1 after three innings, they had many opportunities to climb back into the contest but just couldn't turn a rally into a big inning. Travis Hafner was the main culprit tonight, posting a -.464 WPA due to several poor at-bats with runners on. In the third inning, he struck out with the bases loaded and one out on a pitch in the dirt, and batting in the seventh with the same scenario, he grounded into a double play.

The bullpen again did yeoman's work, holding the Angels at bay while the offense attempted to come all the way back. Jensen Lewis pitched two scoreless innings following Carmona, and Rafael Perez had his slider working against right-handers in the eighth. 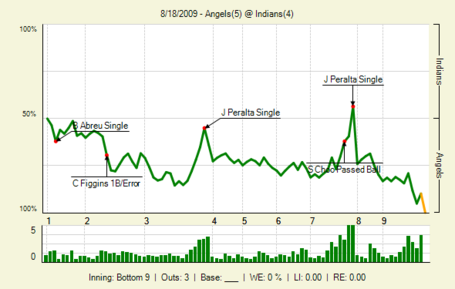