Aaron Laffey just went 5.1 innings, but the bullpen was fantastic, holding a four run lead into the ninth inning. It makes you wonder where this team would be, even with the poor starting rotation, if the bullpen hadn't imploded at the beginning of the season. Or maybe it's just the competition that's making the Indians look good.

As with yesterday's win, the Indians had a big offensive inning. After Twins starter Nick Blackburn breezed through the first couple innings, the Indians jumped on him in the third. Kelly Shoppach and Luis Valbuena homered back-to-back to open the inning, and after Andy Marte got hit, Grady Sizemore went deep for his second home run in as many days. The Indians would keep the inning go after the home run barrage, for Jamey Carroll singled next, and Asdrubal Cabrera drove him home with a sliced double down the left field line. Blackburn would be pulled two batters later. The Twins have had very poor pitching as of late, with Swarzak and Blackburn especially struggling.

Laffey got out of a particularly dangerous jam in the bottom of the fourth. He loaded the bases with three walks, and faced Delmon Young with one out. Young, who had taken Laffey deep his last time at-bat, grounded into a double play, and that turned out to be the at-bat of the game. Joe Smith, Tony Sipp, and Chris Perez held the Twins at bay after Laffey left, and Kerry Wood allowed a run but closed the game out in the ninth.

Hopefully Jamey Carroll is only playing the outfield so that the Indians can trade him for a real-life prospect tomorrow. 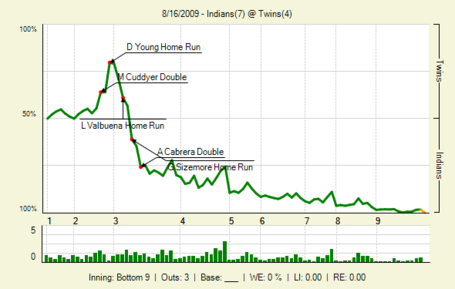