The Indians broke the game open in the fifth inning with four runs off Anthony Swarzak and Brian Duensing. It was a balanced attack, with several players having multiple hits. Grady Sizemore and Shin-Soo Choo both went deep, and Travis Hafner had three hits.

While Matt LaPorta continues to mash in Columbus, the Indians started Jamey Carroll in right field and Chris Gimenez at first base today. For a team looking towards 2010 and beyond, leaving LaPorta in Columbus is idiotic.

David Huff struggled to get through five innings, giving up two runs on nine hits. He got himself into a couple major jams, but he either worked his way out of it (first inning) or limited the damage (fifth inning). After Huff left, the Indians got good outings from Rafael Perez (1.1 innings, 1 hit), and Joe Smith (1.2 innings, 1 hit). Tony Sipp gave up a ninth inning home run to Joe Mauer, but recovered to retire the rest of the side in the ninth. Mauer had three hits on the day, and continues to lead the AL in all three "percentage" categoris (Batting Average, On-Base Percentage, and Slugging Percentage). 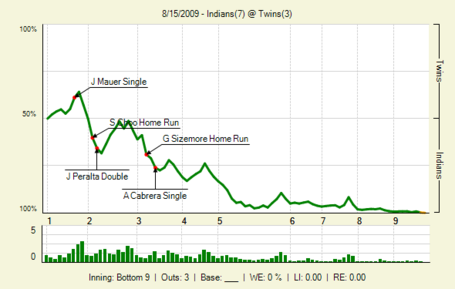