Of the twelve hits the Indians gave up tonight, only one (a Jason Kubel home run) was an extra-base hit, not usually a great formula with which to score double-digit runs. But seven walks helped to grease the works of the Twins offense.

Justin Masterson, who's always had problems with left-handed hitters, struggled against a mostly left-handed Twins lineup. In 3.1 innings of work, he gave up 11 baserunners, including 5 walks. If Masterson's going to be a starter, he's going to have to either change his approach against left-handers or develop a pitch that will at least slow them down. Meanwhile, Scott Baker shut down an Indians offense that's gone cold over the past week. Baker shut out the Indians on two hits and 94 pitches.

After starting August playing very good baseball, the talent level is catching up to the Indians. Not unlike Wile E. Coyote realizing too late the effects of gravity, the Indians seem to have remembered that they aren't a very good club and played accordingly. 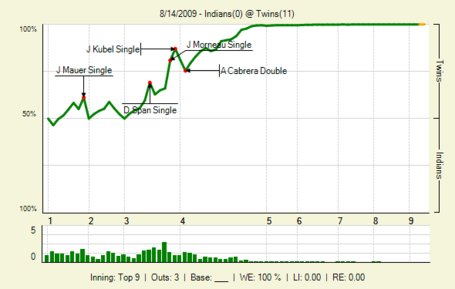