The fourteen hours between last night's shutout at the hands of the Rangers pitching staff apparently did not give the Cleveland Indians enough time to figure out where they had placed their bats.  Today's noon game saw the Indians get off to a good start, with a 1-0 lead in the first on a shallow sac fly from Shin Soo Choo, but not much else for the rest of the game.  Some of the blame for today's game rests on the two rookies Eric Wedge has given considerable playing time to of late, Trevor Crowe and Chris Gimenez.  Crowe actually has had a number of good games, but Gimenez has been clearly out-matched.  Today the two went a combined 0-8 with 4 strikeouts, stranding 9 base-runners in the process.  Even when the Indians were getting hits, they tended to be weak, bloop singles.  Only Luis Valbuena's ninth inning double went for extra bases.

Jeremy Sowers managed to pitch into and out of quite a bit of trouble.  Sowers loaded the bases in the 1st, but got Josh Hamilton to pop out to escape unscathed.  Hamilton came back and got his revenge in the 3rd, knocking in Andruw Jones and Michael Young with a double, giving the Rangers a 2-1 lead.  An Elvis Andrus homerun the following inning extended the Rangers lead to 3-1.  Sowers day was done after two more runners reached, and then one scored on a sac fly, to begin the 6th inning.  Sowers was not terrible - but recording no strike outs and allowing four extra-base hits is not a recipe for success.  The bullpen, Joe Smith and R.C. Perez, managed to keep the Rangers from scoring the remainder of the game, but also allowed four hits in the process.

Cleveland travels on to Minnesota next... 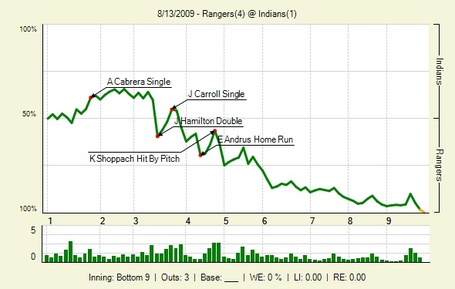