The Indians have lost 64 games so far on the season.  The histogram below displays in what inning the Indians have given up the eventual game winning run in those 64 losses.  Not surprisingly to anyone who has watched the team this season, we have a lot of losses late in the game – 20 of our 64 losses have come in the 8th inning or later.  We had a few particularly brutal periods of this – losses 13-20 all came in the 7th inning or later with the exception of one loss in the sixth (this was the stretch at the end of April and early May spanning two series with Detroit, two with Boston and one with Toronto).  But the guilt is pretty well spread around.  There have also been a lot of games where our starters crapped out early and/or our offense never really put up a fight (mid-July). 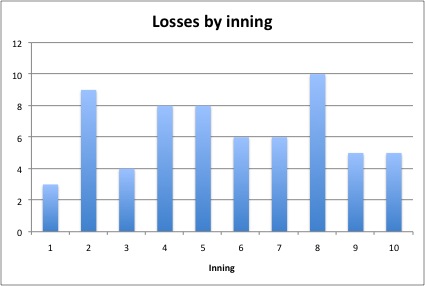 Just how you imagined it, right?  I know Victor was around for a lot of this, but why does Shoppach have fewer appearances than Carroll and Gimenez?

Neither Lou Marson nor Jason Donald seem particularly phased by their trade.  Donald put up a .629 OPS pre-trade, and has a .628 OPS since the trade.  Marson was .751 before the trade, and .753 since.

On the pitching front, Carlos Carrasco, buoyed by his last outing (8IP, 1R, 0BB, 10K), is putting up somewhat better numbers since the trade (3.93 FIP > 2.73 FIP).  Connor Graham, who was already a little wild before he came to Cleveland (BB% 11.7) has been a little more wild in his few outings (BB% 19.0).  Scott Barnes has been performing exactly as he had been, but is now in AA with Graham.  And Hagadone and Knapp are really just getting started.

Speaking of moving up levels, I was curious which Indians had received full-time promotions this season (i.e. not a spot start or injury fill-in).  This list might not be complete, but these are the guys I came up with:

Romero, Espino and Hall are pretty much organizational fillers.  Lofgren is a long overdue, but thus far somewhat successful and well-earned promotion.  Herrmann’s promotion was associated with a full-time conversion to the bullpen.  And finally, Rondon is just a stud.

McBride’s situation is not unlike that of Lofgren, only he’s older, lower in the minors, doesn’t pitch, and has a pretty extensive injury history.  Drennen’s situation is pretty much exactly like Lofgren’s.  Putnam is a bullpen conversion.  Chisenhall and Gomez are organizational studs (and probably the most positive offensive and pitching seasons in the system, respectively).  I find the promotions of Graham and Barnes somewhat interesting, though, as in my view the Indians have in the past more frequently let players settle in at whatever level they were playing at.

My view might be colored by the flurry of bullpen conversions that were going on in the early summer, but I can’t help but feel the Indians are beginning to get more aggressive in their placement and promotion of pitchers.  Whereas they are happy to let a guy like Carlos Santana keep beating up on AA pitching while learning the nuances of catching, they have been pretty aggressive in promoting Rondon, Gomez, Perez and a whole host of younger pitchers including those newly arrived.  I think I like it. 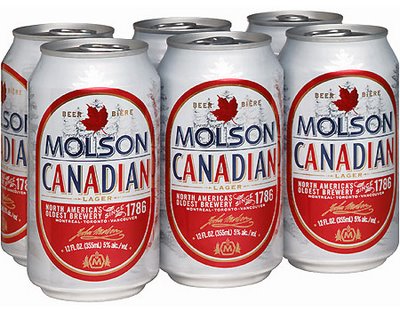